However, during the site inspection engagement on September 30, 2021, the RCC was unhappy with the garbage collection and dirt on the new roads around the city, and the reported burglary and hooliganism of some youths

by Catherine Apolot
in National, News
1 1 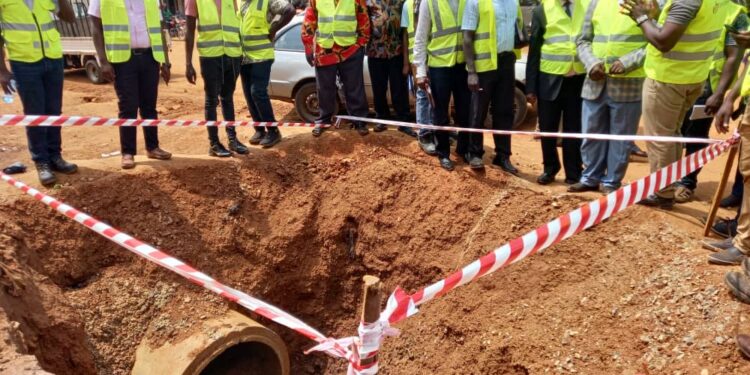 The RCC Mbale, (In checked jacket) listens carefully to the Project Engineer during the site inspection visit on Naboa Road, Mbale City

“After walking through the ongoing civil works, I have appreciated the work being done. The biggest percentage of works is already done which is the drainages that affects the road after it has been done,” the new Mbale City RCC Mr Washaki Ahamada told a stakeholders meeting in Mbale City.

The meeting was also attended by the City Mayor and the City Town Clerk, contractors of Dott services and also the supervision consultants (Air Water Earth and UB Consulting) plus staff of the USMID Program.

The meeting followed some media reports that a cross section of traders in Mbale were impatient with the ongoing civil works on the roads, and they claimed works were far from over on Cathedral and Naboa roads. The traders also petitioned the Minister of Lands, Housing and Urban Development claiming the contractor slow progress had made the roads impassable.

However, during the site inspection engagement on September 30, 2021, the RCC was unhappy with the garbage collection and dirt on the new roads around the city, and the reported burglary and hooliganism of some youths who steal metals from the contractor, that would otherwise be used to offer protection of some pedestrians on the road under construction.

“I am not happy to be here when people are telling lies. People have abused me before over things I can’t even know. I understand when they attack a contractor because they are capable of attacking an individual also,” he said, tasking the Town Clerk and his technical teams to take advantage of the RCC airtime on radios and explain most of the ongoing Government projects in the city.

He added; “As a Government we want to uplift the standards of our people and as your RCC, I will protect the contractor for doing great work, but will not stop to castigate you and even arrest you, once you have done wrong things. Just watch me,” he said.

The complaints from the traders, according to the supervising Engineer Mr Happy Moses Were informed by the ongoing drainage works which have taken time, because they are always affected by heavy rains, whenever they come.

“Because of the heavy drains there are, we have taken more time than the public expected on Naboa & Cathedral Road. If we fail in handling this drainage, the roads will collapse in a few years and we don’t want that to happen” Eng Were said.

He added; “These roads also have utility service ducts so that once the road is completed, no utility agencies are digging it again to pass their services. This also takes time because some of those agencies don’t come on time to help us shift their utility lines.”

During the first phase of Usmid (2015- 2019) Mbale, then a Municipality rehabilitated the following;

In the current and second phase of USMID, known as called USMID-Additional Financing, (2019-2023),Mbale has contracted out and will by the end of the Program shall have improved and constructed the following infrastructure: Cathedral Avenue Road, Naboa Road, 0.35kms of Central Road, North Road, the remaining Pallisa Road connecting to Bishop Wasikye Road, Nkonkonjeru Terrace, Masaba to Bungokho Road; repairing the clock at Clock Tower and Beautification of Butalejja Green (Children’s Lion Park) as well as for Institutional Strengthening.

All the works have been contracted to M/S Dott Services but with two supervision consultant firms; M/S UB Consulting and M/s Air Water Earth. The works in Mbale are contracted at a sum of UGX 16,256,932,683.11/= and to be completed in 15 months.

In his inspection, the RCC and his team established that the following were the ongoing activities;

The RCC was told that the major challenge was the Heavy Rainfall in the month which had disrupted the progress of works hence the cause of the slow progress. Other challenges noted were; The low production of materials by the contractor especially pipe culverts for drainage works which had slowed down progress and Mechanical breakdowns of the equipment for the contractor.

The RCC asked all technical staff to counter the negative publicity of such good government projects but also said he would personally not support anyone and any contractor if one does wrong things. “I praise good work and I abhor horrible work.”

Apart from rehabilitation of roads in Municipalities and Cities, the World Bank Funded USMID Program also supports other core areas of Urban Development for example;

Mbale City, is one of the original beneficiary Local Governments of the USMID, and the program is implemented and supervised by the Ministry of Lands, Housing and Urban Development.