by Brian Mugenyi
in News, Politics
21 0 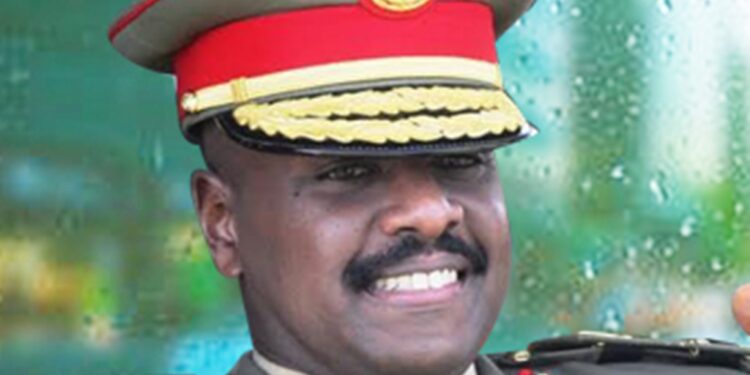 The conundrum of Uganda’s politics has been heavily dominated by the ruling National Resistance Movement (NRM) under President Yoweri Museveni since 1986.

Several opposition leaders such as the Forum For Democratic Party (FDC)’s Kizza Besigye and National Unity Platform (NUP)’s Kyagulanyi Ssentamu alias Bobi Wine have thrown their hard stone only to fall astray before catching Museveni from flying in the air with the seat.

Now that Kyagulanyi and Besigye have failed in their quest for the Uganda’s darling presidential seat, the attention of the moving waters has shifted onto Lt Gen Muhoozi Kainerugaba, the first son to the incumbent President.

It all started like a lovely song a few years ago to majority of the NRM when Kainerugaba’s identity was brought into picture as the likely Museveni successor.

Talks about the Muhoozi Presidency first gained prominance when it was brought up by former spy chief, Gen David Sejusa, who accused his former boss, the incumbent Museveni of trying to impose his son onto the people of Uganda, hence the analogy “The Muhoozi project,”.

In 2020, Muhoozi said the phrase, ‘Muhoozi Project’ was coined by ‘evil people’ to try and destroy ‘us’ but has since been turned from a ‘curse’ into a ‘blessing.’

Ealry this month, Museveni said his son Muhoozi did not need to be groomed by him to become Uganda’s next President.

In an exclusive interview with France 24’s Marc Perelman at State House Entebbe, President Museveni asserted that Muhoozi’s fate can only be decided by the people of Uganda who cast their vote through free and fair general elections.

Rogers Bulegeya, the National Resistance Movement (NRM) youth leader in Masaka City says basing on his appealing character, Muhoozi has all it takes to become Uganda’s next President.

“I coherently believe that Muhoozi has been a total revelation in the making as far as the Uganda’s political ideologies and metaphors are concerned. He befits fully in the young generation and I strongly see traits of a true President in him,” said Bulegeya.

On the other hand, Hamza Sserugunda, a journalism lecturer and political analyst says Muhoozi us yet to reach a pinnacle to contest in Uganda’s presidential race.

“Just like any father, Museveni can’t deny his son from succeeding him. Politically, he is still weak only to succeed fairly in the Military wing,”Sseruganda states.

The political analyst further shares that Muhoozi has tried his best to put to light his political ambitions through social media which is generally centred in the central thus forgetting other Ugandans in the rural areas. He also faults President Museveni of not doing enough to empower his son politically.

“A few clusters of youth belonging to NRM has achieved from Muhoozi’s project. However, his attitude of mobilizing them has been a total disaster. It would’ve worked miracles for him if he had mobilized them throughout the country,” Sserugunda added.

“He has only been active in political season thereby protecting the presidential seat of his father.If you want to become a politician, one should acquire political skills and one must aspire to make a difference where it has been lacking,” Sserugunda, a former Kampala University lecturer noted.

He also advised Gen Muhoozi to first contest for a parliamentary seat before turning his focus on presidency.

According to Faizo Ssebugwawo also the youths Leader, Muhoozi would’ve been regarded as better leader if the key players in the current political system headed by his father had performed according to Ugandans’ expectations.

He says majority of the youth are poor and they think their ordeal has been brought about by the poor governance of the current government where Muhoozi belongs. Ssebugwawo says this makes Ugandans perceive him as a would be ‘oppressor’.

“It is not the National Resistance Movement that is not loved. It is the leader that has overstayed in power. If the current regime changes the ways it governs the country probably we can get our next President from NRM and it may be Gen Muhoozi,” he said.

Who is Gen Muhoozi?

Born on April 24, 1974 in Dar Salaam Tanzania, Muhoozi is the first son of President Yoweri Museveni and Janet Museveni,the Minister of Education and Sports.

As a child, Muhoozi attended schools in Tanzania, Mount Kenya Academy in Nyeri Kenya and Sweden. After his father became President , he attended Kampala Parents School, King’s College Budo for a while and St. Mary’s College Kisubi.

He was later admitted to Egyptian Military Academy where he took both the company and battalion commanders courses. Upon his return to Uganda from Sandhurst in 2000, Muhoozi was assigned to the Presidential Protection Unit as a second lieutenant. In 2001, he was promoted to the rank of major in the army.

As a major, he became a brigade commander in the Presidential Guard Brigade.

He also attended the Kalama Armoured Warfare Training School, in Kabamba, Mubende District. In 2007 he was admitted to a one-year course at the United States Army Command and General Staff College at Fort Leavenworth, Kansas, graduating in June 2008. Following that, he successfully completed the Executive National Security Programme at the South African National Defence College.

In 2019, Museveni promoted Muhoozi to Lieutenant General, the second highest army rank an officer can obtain in the Ugandan army.

The General is married to  Charlotte Nankunda Kutesa and the couple has three children together.

INNOCENT NAHABWE: How modern day men of God choose to only feed the soul, forget the bodies

INNOCENT NAHABWE: How modern day men of God choose to only feed the soul, forget the bodies