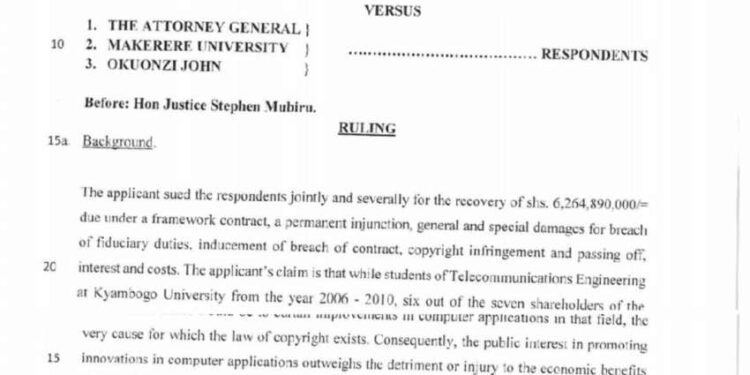 HIGH COURT – A software application dispute which started after directors of a technology start-up firm, most of them with close family relations failed to agree internally and broke up, has sucked in government, including two leading public universities.

On May 20, Justice Stephen Mubiru, dismissed an application for an injunction by directors of Zeenode Ltd that sought to stop Makerere University and the ICT Ministry from developing a software application to replace the contested Academic Information Management System (AIMS).
The dispute, which has also sucked in Kyambogo University and several other public universities, arises from an ICT project which had been signed off as a local innovation under the NIISP, through the Ministry of ICT and National Guidance.

In the standoff is Mr Philemon Wenganga, the executive director of Zeenode Ltd, and Dr. John Okuonzi together with Mr. Henry Tumusiime, who later led break-away shareholders to form another technology firm — HoneyComb Technologies Ltd.
Mr Wenganga, son to Karamoja Affairs Minister Mary Goretti Kitutu, formed the company with former university peers including Ms Fortunate Tumuhaise, Mr Hudson Kisitu, Mr Joseph Katongole, Mr Joshua Muzaaya and Mr Shamsu Zziwa. All were classmates at Kyambogo university until they graduated from the engineering school in 2011. Later, according to the company records, Mr. John Musiime – who is also the company lawyer, Dr. John Okuonzi and Henry Tumusiime joined as additional shareholders in the company.
According to well-placed sources, Mr Wenganga is also married to Ms Fortunate Tumuhaise, who is a younger sister to Mr. Henry Tumusiime – and it is this family relations that is said to be the genesis of the foregoing software wrangle.

The friends and family software project that started after 2011 and supervised by Dr. Okuonzi, would later be of interest to Kyambogo university, with authorities then deciding to employ the former students to work under Dr. Okuonzi, to develop their idea and help automate the university records into the E-Kampus application.
That is why Kyambogo University is now, too, claiming the software application under dispute in the court, on the account of having employed the students with directions to develop it.

According to information available, on June 27, 2017, Kyambogo University Vice Chancellor, Prof Eli Katunguka Rwakishaya, wrote to the Ministry of ICT introducing the Kyambogo team that developed the E-Kampus software, to work in collaboration with Zeenode Ltd, to deploy the AIMS software for use by public universities.
Indeed, Prof. Rwakishaya introduced Dr. Okuonzi as team leader and Mr. Henry Tumusiime with Mr Wenganga as developers. Zeenode Ltd was introduced as the process partners as identified by NITA-U.
“Kyambogo university welcomes this initiative and is ready to work with the system developers, Ministry of ICT, Ministry of Education and Ministry of Finance to realise the successful adaptation of the system with other universities,” Prof. Rwakishaya wrote.
From Prof. Katunguka’s letters, it was crystal clear that Kyambogo had invested an arm in the development of the system.

Under currents that lead to split:
According to sources familiar with the developments, the Ministry of ICT and National Guidance, Makerere and Kyambogo universities are now caught up after an internal business war in Zeenode Ltd, pitting a group led by Mr. Wenganga on one hand and another led by their Dr. Okuonzi and Henry Tumusiime. This dispute has innocently drawn in the former ministry of ICT Permanent Secretary, Mr Vincent Bagiire, who has had to swear affidavits to set the records straight.

The dispute, which started as a misunderstanding between Mr. Henry Tumusiime and his sister Fortunate Tumuhaise, sucked in Mr. Wengaga – who naturally had to side with his wife. Soon, the other directors are said to have taken sides – leading to a massive fallout. One group started accusing the other of financial misappropriation which culminated in Mr. Wengaga’s group chasing Dr. Okuonzi’s group out of the company.
However, it looks like Mr. Tumusiime and Dr. Okuonzi were at the helm of the projects that Zeenode Ltd was running with ICT Ministry as well as the universities. The internal fallout amongst the directors subsequently affected their project activities including relationships with clients.

The expiry of their contract in 2019 with ICT Ministry did not help matters. According to sources at Makerere University, the AIMS application was having challenges and the university has raised complaints to ICT Ministry. One of the key system module – the accounting module was using a cloud-based application called Xero Accounting. This is developed and hosted in Newzland implying the Zeenode Ltd was exposing Universities’ data and information to external parties.
Meanwhile, the ICT Ministry is said to have contracted Zeenode Ltd to develop and scale the E-Kampus application as recommended by Kyambogo University – which Zeenode Ltd later registered the copyright as AIMS.

According to court documents, the then ICT Permanent Secretary, Mr Vincent Bagiire had written to the Universities informing them to engage with Zeenode Ltd directly if they wished to continue using the AIMS application. This is said to have irritated Zeenode Ltd and threatened to sue the ICT Ministry. They did go ahead to sue. The matter, to be resolved in the main suit, after Zeenode Ltd lost the bid to get an injunction against Makerere University, will be determined when the matter comes up for hearing sometime in November.
But dismissing their attempt to get an injunction at the commercial court division of the High Court, Justice Mubiru noted that the move by Zeenode Ltd directors was likely to jeopardise public interest.

“In circumstances where it is not clear to court yet as to whether there is only one way or a limited number of ways in which to digitally express the idea of an academic information management system, it is more prudent to err on the side of caution by not issuing an order whose effect would be to curtail improvements in the computer applications in that field, the very cause for which the law of copy right exists,” the judge ruled.
“In my view, the public interest favours refusing rather than granting the injunction,” Justice Mubiru added.
It is interesting to imagine how a simple family conflict results into a major legal battle that sucks in government and various universities.

According to a business analyst, it is apparent that the lack of corporate governance in start-up companies seem to be the underlying cause of these mishaps.
“It was a matter of time for Zeenode Ltd to suffer these challenges given that all shareholders are the same as directors and employees,” the analyst noted.

NRM Caucus to consult on matters of national importance