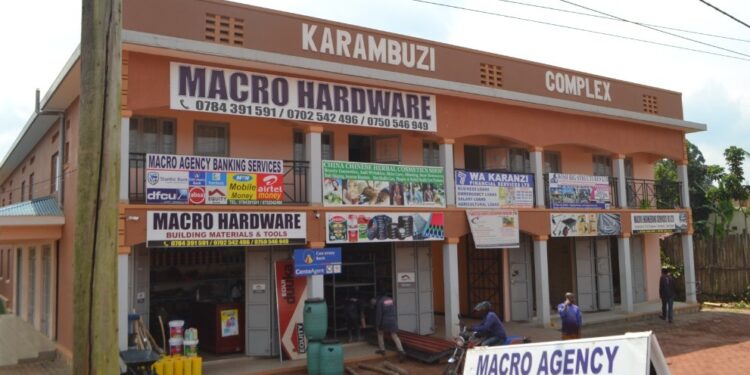 A bitter row has erupted among children of Front For National Salvation – FRONASA war hero James Karambuzi over a two stored building that was donated by President Museveni in memory of their father.

Karambuzi, who hailed from Kabale, was executed in extrajudicial killings that took place in 1973 on orders of the former president Idi Amin Dada After being charged with treason. He was killed alongside David Kangyire who was a student at Kigezi College Butobere and Joseph Bitwari.

The three were executed by a firing squad commanded by one Col. Fadhul who was attached to Makenke Military Barracks in Mbarara District in Kabale stadium.

Karambuzi reportedly left behind a family of 10 children whose mother also died of mental illness in the same year her husband was killed. Currently, only one son and two daughters are alive.

In memory of Karambuzi , President Museveni built a 32 roomed commercial building in Kabale Municipality along Kabale – Katuna road to support his family. However, the Karambuzi sisters accuse their younger brother Happy Karambuzi of using the building alone, and they have written to President Museveni asking him to intervene in the matter .

Costance Akankwasa the elder sister says their brother was also given a vehicle (Lorry) which he uses alone and has never helped them whenever they asked him for financial assistance as they are now struggling to cope up with life.

Annet Kenyangye, the younger sister said her brother vowed that she would never have a share on any Karambuzi property because their mother reportedly gave birth to her after the death of her husband, therefore she should  first prove that she was a biological daughter of the late Karambuzi.

In response, Happy Karambuzi asked his sisters to ”back off” his property saying that the building was given to him alone after he met President Museveni through former Prime Minister Dr Ruhakana Rugunda and tabled seven different financial requests to the president.

Happy says that the president asked him to tell his sisters that they would get their own financial assistance from the state house, but not having shares on the building.

Happy blames his uncle Warren Turyahikayo for being behind the accusations against him. He claimed that Turyahikayo was instrumental in getting the commercial building from the president and therefore expected to have a room or two for his own income generation, which was not granted.

Our reporter has also learnt that the Nakasongola RDC Darius Nandinda tried to intervene in the matter when he was still the President’s representative in Kabale District.

When contacted the former State house Comptroller Lucy Nakyobe Mbonye who was directly in charge of monitoring the construction works explained that all biological children and grand children of the late Karambuzi were shareholders on the building and said the house was built to support the family of the late Karambuzi, and not an individual.

Nakyobe confirmed that she had sent Nandinda to settle the matter with the same guidance that Happy Karambuzi should stop claiming sole ownership of any presidential donations to the Karambuzi family.

Nakyobe asked the aggrieved sisters to report the matter to the current Kabale RDC Godfrey Nyakahuma for assistance and report back to her in case the matter is not solved.