Ingrid Turinawe: FDC is collapsing because of Nandala Mafabi’s arrogance and hatred towards members

by Stephen Kalema
in News, Politics
12 1 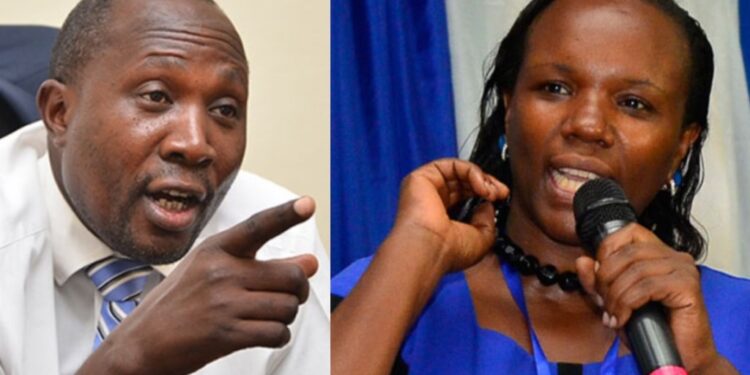 The former Forum for Democratic Change (FDC) mobilization secretary and women’s league chairperson Ingrid Kamateneti Turinawe has warned that the opposition party is in its last days of collapse if the leadership does not reduce the powers of its Secretary-General Nathan Nandala Mafabi.

During an interview with CBS FM on Friday, Turinawe said that there is a lot of crafty undertakings going on at the Najjanankumbi based outfit which the public don’t know about.

Turinawe added that they suspended her from the party because she broke the constitution yet Mafabi has always acted out of the law by diverting the party’s money into his businesses and problems.

“I don’t want to go into details but I have a lot that the leadership of the party has done to me and I have kept quiet. When we asked for money for the campaigns, SG Mafabi refused to give us money and took it to pay himself for the house he had rented to The Democratic Alliance (TDA).”

She added that her war with Budadiri County MP started when she refused to agree with the party leadership to pay him Shs700m, the money he was demanding from TDA yet FDC is different from TDA.

“How can you tell me that the Secretary-General of FDC who rented TDA a house comes again to the FDC to ask for money from the treasury to pay for a house for TDA? This was totally wrong, FDC is not TDA. He was supposed to go to court if TDA had failed to pay. I refused that proposal because we had to build the party structures instead of paying that money illegally to a one selfish person. There was no memorandum that FDC was the one paying for TDA.”

Turinawe said after her refusal, Mafabi started orchestrating plans to eliminate her from the party’s leadership.

“If you disagree with Mafabi, you will never get money from the party, you will never get the party ticket to contest for any political office even at LC1 level. If you come with any program that he does not support, he will wage a war on you, he will even pay other party members to fight you till you leave the party. But I’m done with wars within the party that is why I left.”

“Mafabi is the overall man in the party and is the source of every problem in the FDC. He must stop leading the party illegally, we can not blame Mr. Museveni for his poor leadership yet it’s the same in our party. He wants every party member to worship him. I will never do that, I only worship God.”

Last year in December, FDC expelled Turinawe along with Winnie Babihuga, and Darius Tweyambe following their defiance to the party constitution and stood as independent candidates after losing out in the primaries.

“The entire public is hereby informed that these independent candidates are not members of FDC and have no moral authority to act on behalf of FDC,” Mafabi stated in a letter last year. He also warned, “Any member of the party who campaigns for an independent or otherwise shall be dismissed from the party.”