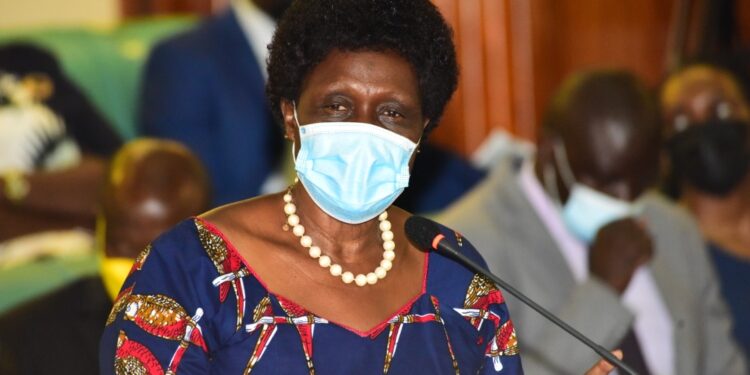 Beatrice Anywar, the Minister of State for Water and Environment

The Minister of State for Water and Environment, Beatrice Anywar, is concerned about the rapid rate at which Uganda is losing its forest cover, saying if it is not mitigated, the consequences could be dire.

Anywar, who was presenting a statement on the status of environment and natural resources to Parliament on Wednesday, 22 September 2021, said the annual decline in forest cover from 24 percent to 9 percent, has pushed Uganda to rank among the most rapidly deforesting nations in the world.

She said besides forests, other natural resources stand the risk of extinction, if government does not act fast to restore the little that remains.

“Uganda’s water resources are trans-boundary [shared with other countries] and the amount of water available in country has declined from 66km3 to 43km3 and the worst is expected to happen with the serious demands on water by other sectors of the economy,” said Anywar.

She explained that wetlands were also diminishing due to encroachment and that Uganda loses 75,100 hectares of wetlands annually. She requested Parliament to consider allocating to the ministry a budget sufficient to implement a strategy on water and environment conservation.

A section of legislators said there was no political will to preserve and restore natural resources, citing some investors who were granted land in wetlands and forest reserves.

“I come from a gold mining district, where local artisanal miners were evicted and the Chinese left to destroy over 20km of forest reserve. Please take interest in what is happening in Buhweju,” said Francis Mwijukye (FDC, Buhweju).

Hon Charles Tebandeke (NUP, Bbale) said two forest reserves in his constituency were given away to private developers and that the only one left is being encroached upon under the guard of security organs.

“Surprisingly, these people encroaching on the forest reserve are protected by National Forestry Authority. I wonder what relationship you have with NFA?” asked Tebandeke adding, “In my area, they chase away local residents who encroach on forests but protect some encroachers with guns.”

Legislators noted that there are several players in the degradation of natural resources and environment, and recommended the Water and Environment Ministry to work closely with other sectors if it is to make any impact in preserving and restoring natural resources.

“I do not see a linkage with the Ministry of Energy to address the rampant charcoal burning or the Agriculture ministry to address the issues of farming in wetlands,” said Emmanuel Ongiertho Jor (FDC, Jonam). He recommended that as government evicts people in wetlands, it should provide alternative sources of livelihood.

ALDRINE NSUBUGA SNR: A beggar and celebrity can’t appear in the same sentence