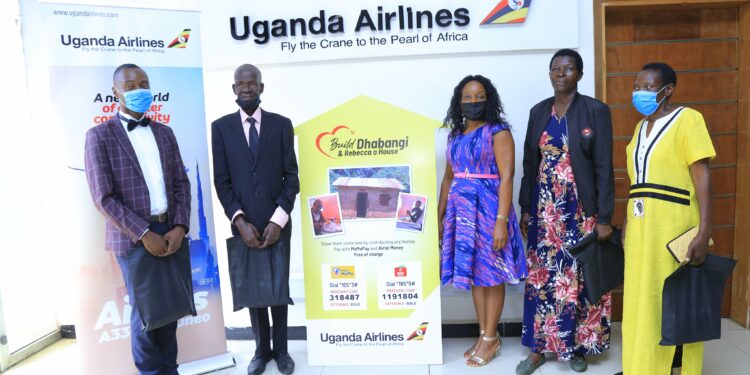 As scriptures say ‘Happy are those who are merciful to others; God will be merciful to them!’ Mzee Wilson Dhabangi and Rebecca Mukyale are now reaping from the good deeds they rendered to a then poor young boy Henry Mutebe 24 years ago.

Over the weekend, Mutebe, a social and health activist surprised Mzee Dhabangi and Rebecca with a dream flight to Nairobi Kenya aboard Uganda Airlines aircraft.

Mutebe did this in appreciation for the love, care and help the two people accorded to him when he was still a young helpless school boy. He saved for a year to make the surprise happen.

“One day this man learnt that my mother had been away for too long…and yet I was at school. He decided to come and visit me. We were not related…but he was and is a good man. The first Sunday, he visited me became the beginning of many more visits that stretched over three years,” Mutebe partly said in an emotional article last Sunday.

“This man visited me every Sunday for as long as school was open. That’s roughly over 100 Sundays over between 1997-1999. I do not remember any Sunday he did not come to visit me. It did not matter whether it rained or not…whether he was sick or well. He would ride his bicycle and come visit me. Sometimes he carried a half kilo of ground nuts prepared by his wife, other days he simply came to talk to me. One day he brought a plastic tin filled with black tea.

“He told me that if I worked hard and listened to teachers, I would fly in planes and travel to different places. He said if I succeeded, then even people like him who never got an education would perhaps have an opportunity to fly. For whatever reason, he always emphasized the issue of flying,” he added.

Mutebe further disclosed that he decided to also surprise Rebecca because she is a special woman who helped him and his siblings when their mother was away. “She literally would mother us…and has remained my mother’s best and most loyal friend.”

Apart from the surprise flight, Mutebe also revealed that he had saved some money to complete Dhabangi’s  house.

Mutebe’s story caught the attention of many Ugandans including the management of Uganda Airlines which has since come on board to help the former fulfill his dream of putting up decent homes for his poor guardians.

On Thursday while speaking at Uganda Airlines Sales offices in Kampala,the Acting Sales and Marketing manager Doreen Nambatya Mulindwa thanked Matebe for choosing the National Airlines to fly to Kenya because his story made whoever was on the board to appreciate the role the old man and woman played in his life as a young boy.

“We thank you for sharing with us your story and making us fly with you and the important people in your life; Mzee Wilson Dhabangi and Madam Rebecca Mukyale. You made us proud. We want to thank God that you chose us to participate in making your dream come true. I want to inform you that Uganda Airlines is not about the flight but we can do other things for example we are taking on this challenge of building houses for Mr. Dhabangi and Maama Rebecca. It does not stop there on a flight but we also go an extra mile to make people’s lives change,” Nambatya said.

She added that following the emotional story Mutebe posted on his Facebook page, the Airline has been receiving calls from people asking how they can join Mutebe to please the old man.

“This is just the beginning, many people wanted to help and we have taken on the mantle and we are going to lead in this and everyone who is willing to come on board ‘#build a house for Mr. Dhabangi and maama Rebecca’ you are all welcome today we are here to launch this campaign.”

Nambatya also pledged that this drive will not only stop on Mzee Dhabangi and maama Rebecca but it will spread to other Ugandans.

Joyful Mutebe thanked Uganda Airline for the kind gesture saying that he is happy that his dream of making Dhabangi and Rebecca happy is going to be fully realized.

move since many people after posting his story started asking him why did he flying the old man instead of building the house for him.

Mzee Dhabangi,74 years is a resident of Nambale village Iganga district and is surviving with one wife and 12 children, he is a peasant farmer. His children did not have a chance to get proper education but one finished Senior four.