by Kelvin Patrice
in National, News
130 1 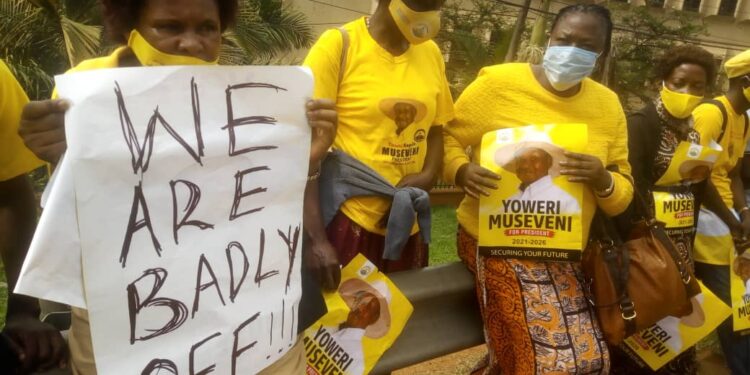 Scores of National Resistance Movement (NRM) flag bearers in this year’s general elections in Kampala who had stormed State House to meet Party Chairman Yoweri T. Kaguta Museveni have instead been made to settle for loads of canes from security.

The group has widely been reported in the media seeking consideration from the Head of State in form of placements and financial bailouts following their ill-fated attempts to represent the party at the different political levels.

With several attempts to meet Museveni failing over the months, the group made another one today, morning, many of them with their mattresses to sleep on should they fail to meet the Head of State today.

As was the case in June this year when they stormed State House Nakasero, it took just minutes before security swung into action, trying to negotiate with them that they return home and seek an appointment with the President through appropriate avenues. The pleas however fell on deaf ears and a scuffle ensued.

In the process, an unidentified woman who is reported to have been beaten by the Special Forces Command (SFC) operatives fell unconscious and was rushed to the hospital for treatment.

Some NRM members have castigated their Kampala counterparts for employing uncivil means to force an appointment with the President, something that many say exposes the party to shame.

Benesa Edrine, the NRM coordinator for Bukedi sub region suggests that his pals from Kampala shouldn’t have had any problems in seeking to meet their leader as long as they followed the established protocol. He says that since NRM has flag bearers who failed throughout the country, seeking special treatment by a specific group sounds unsustainable.

“NRM has flagbearers all over the country.I wonder why Kampala flagbearers are seeking special attention from HE the president. The appointment itself wouldn’t be bad but the spirit in which it is being executed leaves a lot to be desired, ” He told Watchdog Uganda.

Micheal Kibwiika, a contestant in the NRM primaries for Iganga District last year says that, “It’s unfortunate that she has collapsed due to the way she has been handled.However why do flag bearers in Kampala simply storm the State House, why do they think they are the only flag bearers, so many of us contested and lost out and we are quiet and doing other things.”

“If it’s not greed and selfishness, they should give the Head of State ample time to concentrate on national issues that benefit the nation but not individual interests.Short of that, they will continue being subject of humiliation and embarrassment,”Kibwiika added.

“Believe me they are covertly insinuated by a team of Kampala NRM leadership…. but it’s not productive for the party…
Kampala team is erroneously portraying as if Kampala flagship is the heart of the party…They would have been a bit patient and follow an expected well-tailored national schedule of such meetings,” another member advised.