The campaign will see students from select universities battling themselves in creative extravaganza spanning 4 weeks. 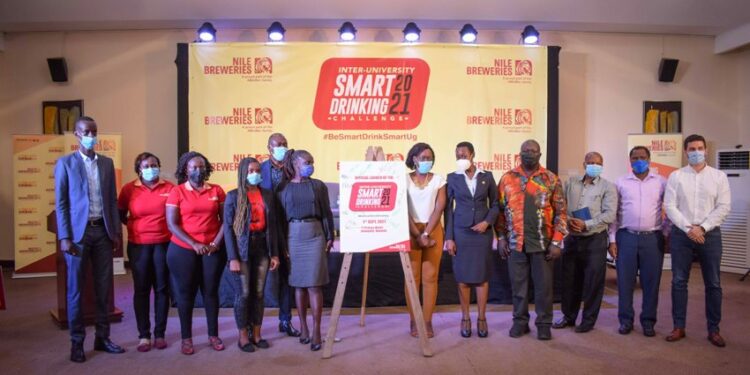 Photo moment between officials from Nile Breweries Limited, The Ministry of Gender, Labour and Social Development and university represenatives

Kampala, 1ST September, 2021: Nile Breweries Limited (NBL) has launched a competition among universities dubbed BeSmart DrinkSmart, Beera Mu Class to promote a culture of responsible drinking and reduce the harmful use of alcohol among the youth and University students.

The campaign will see students from select universities battling themselves in creative extravaganza spanning 4 weeks.

“The Inter-Uni Smart Drinking Challenge, one of these, is aimed at influencing social norms and individual behaviors by challenging University students to submit the best ideas to encourage responsible behaviour among Youth,” he added.

NBL has invested Shs200M in the Beera Mu Class (Be Smart), which will see students compete in written, video, graphics and social media content forms to create winning concepts based on the theme BeSmartDrinkSmart, Beera Mu Class.

“We intend to create an interactive forum of champions of the behaviours and social norms that embody Smart Drinking in various universities in the country. We want to change lives together with our consumers such as the students,” said Onapito Ekomoloit, Legal & Corporate Affairs Director NBL.

“For the start, we will be partnering with 5 universities which include Makerere University, Mbarara University of Science & Technology (MUST), Kampala International University (KIU), Soroti University & Kyambogo University,” he added.

The Guest of Honor, Mr Mondo Kyateka, Asst Youth & Children Ministry of Gender, Labour & Social development noted that Youth in Uganda are the youngest population in the world, with 77% of its population being under 25 years of age thus the change we need in our society can best come from them.

“I challenge youth to be problem solvers. Such a campaign will stimulate the creativity of University students and go a long way to solve alcohol abuse in our society,” he said.

“University students are at risk of substance abuse such as alcohol so this campaign is fitting,” he added.

According to Claire Asiimwe, the Project Manager, NBL through various CSR programs, Nile Breweries Limited has continued advocating for responsible consumption as well as supporting initiatives to formalize illicit alcohol in order to contribute to the reduction of harmful use of alcohol.

“NBL’s Smart Drinking goals have over the years been delivered through partnerships, a set of programs and initiatives for instance, in bars activations, awareness campaigns in traditional media and social media, social behavioral change campaigns such as No Excuse, road safety programs among others,” she said.

To join the challenge, students in the partner Universities will dial *252*3# and follow prompts where they can submit their concepts in form of voice note, writing, video or art form. These will be subjected to the scrutiny of competent judges. Through taking part in this challenge they not only stand a chance to win UGX 3million in cash prizes but also exposure and opportunities to interact with their potential future employers.