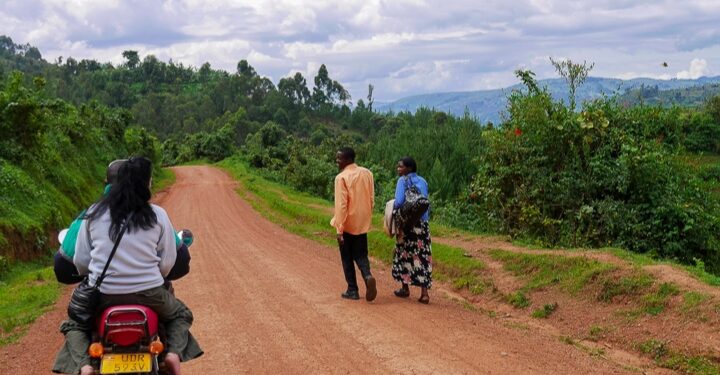 There is excitement among leaders and tourism stakeholders in Kabale and Rubanda district after the Uganda National Roads Authority-UNRA, started display of evaluation report for the 15.1 kilometer Kabale-Bunyonyi-Kakooko road, ahead of the start of the compensation process, for the project affected people.

The UNRA officials who held a meeting with the Kabale Resident District Commissioner, Darius Nandinda in his office on Tuesday a head of the start of the two weeks display exercise, are led by Allan Tonny Kimera,a land valuer attached to Kabale District and Repher Akamanya, a land surveyor.

Mr Kimera noted that the data, which they collected between March and May 2021 was approved by the government chief valuer on May 21,2021.

“The display of compensation report follows a data collection activity, which was collected between March and May 2021, and was approved by the government chief valuer on May 21, 2021. The display of the report which begins tomorrow (Wednesday), involves residents whose property will be affected by the road construction works, consenting to value attached to their property and signing a consent notes, before the ministry of finance starts to compensate,” Mr Kimera said

He added that compensation is expected to start with immediate effect and end in October 2021, after which the affected residents will be given six months to vacate and bidding for contractors will be closed on September 23, December.

In his remarks, the Kabale Resident District Commissioner, Mr Darius Nandinda called on the affected residents to work and cooperate with the UNRA officials so that the construction works are not delayed.

“This is our road and once it is completed, tourism will be boosted and the residents will get where to pass while carrying their crops. Therefore cooperate and work with UNRA officials so that the construction works are not delayed. We also want to commend the government for working hard to improve our roads because that is the only way to develop,” Mr Nandinda said.

The Kabale LCV Chairperson, Nelson Nshangabasheija commended the government for responding to the cries of the users since it has been in poor state yet it is a tourism road.

“Am optimistic that once it is complete, the tourism industry will be boosted, the community will also benefit since they will now get where to pass while carrying their goods and agricultural products to the market centres,” Mr Nshangabasheija said.

The Chairperson Uganda Community Tourism Association, who doubles as a community Liaison Officer in charge of the project, Patrick Tumwijukye said that they talked to the affected locals and are ready to comply with the outcomes of the surveyors report so as to allow the construction works to kick start.

“There is no way people can be against the project, because most of them have been stuck with their crops due to the appalling state of the road, they did not have where to transport their produce to the market. So we are happy and we hope the project will end without an obstacle” Mr Tumwijukye said.

Mugish Muntu: Gen Lokech was a good soldier whose wonderful legacy was soiled by the regime