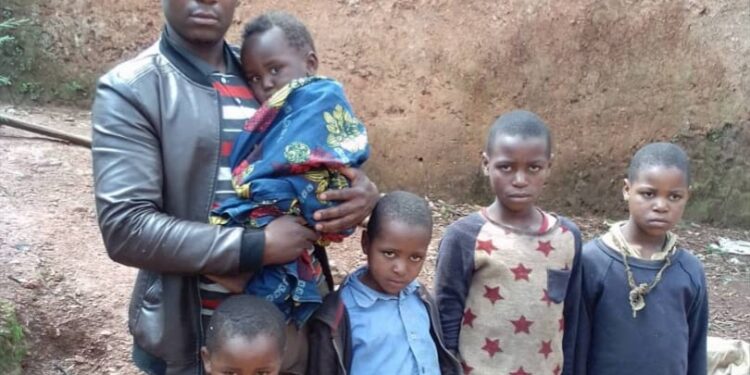 Sabiti Laban with his five children

Sabiti Laban, 29, a prominent businessman in Ruhija sub county, Rubanda district is stranded with his five children, including a toddler, after failing to meet dowry demands.

Married eleven years ago, his wife Twikirize Prize, 29, was on Wednesday last week taken away by his father in-law for failing to pay dowry worth Shs 6 million leaving him stranded with five children.

“My father-in-law visited me without informing me, and demanded his remaining dowry immediately or else take her daughter. I requested his patience for three months, but he directed her to sit on a waiting Boda Boda. I had slaughtered a chicken for him but he rejected it,“Sabiti Laban said.

According to Laban, his father in-law directed her daughter to leave behind our last born who’s less than a year old, because she got married childless eleven years ago.

“When my father in law toddler her to board the motorcycle, she attempted to go with her baby, but the father reacted furiously saying she was married alone. Am now stuck with this baby who is breastfeeding yet her mother is away now, ” Laban said.

When our reporter contacted Mr. Kakona Geoffrey, the father in-law to Mr. Laban, he accepted to have taken back her daughter until his son in-law pays all dowry balances.

“She’s my daughter and has produced children. Will he ever pay me my dowries before I act? Let him pay, that’s it. When I visited them demanding dowry they said they don’t have. When I demanded my transport to take me back, they also didn’t have, ” Mr. Kakona said.

Twikirize prize is now at his father’s home in Kirima, Bushuura in Kanungu District.

A case of child desertion has been opened at Ruhija Police station under file number SD REF 05/18/08/2021.

Paying dowry is a practice that is particularly entrenched among some Ugandan ethnic groups. The negotiations over payment take place between male representatives of the two families – women are not allowed to take part.

STRIVE MASIYIWA: You will never succeed at anything if you are not prepared to learn from those who have actually done it successfully

STRIVE MASIYIWA: You will never succeed at anything if you are not prepared to learn from those who have actually done it successfully