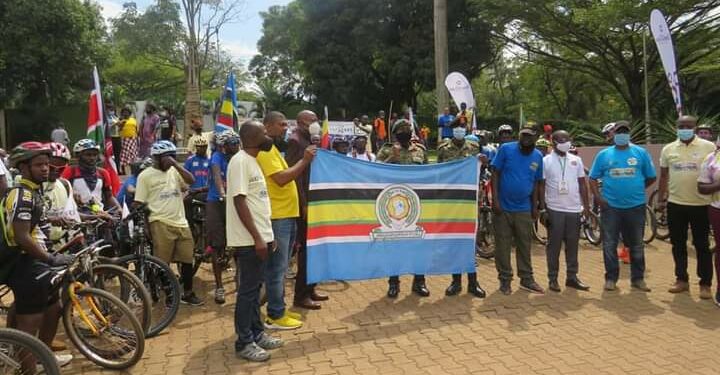 The Uganda Peoples’ Defence Forces has today joined partners to flag off the 4th edition of the “Ride 2 Integration” campaign aimed at promoting and popularizing the concept of the East African Community Integration.

In her remarks, the First Deputy Prime Minister and Minister of East African Community Affairs, Rebecca Kadaga who was speaking at the Independence Monument in Kampala thanked the Ministry of Defence and Veteran Affairs for the services that the Uganda Rapid Deployment Capacity Centre provided to the cyclists.

Under the theme “Clean Africa, Experience Africa and Integrate Humanity,” Hon. Kadaga called upon the participants to use sports as a means of promoting peace and development among the regional states.

The campaign that was launched in Tanzania on 1 August 2021 will take 65 days covering 6,000km and the Uganda segment is slated to end at the Kyanika border on the 28th August 2021.

The Director of Historical Sites, Monuments and the UPDF Diarist and Archivist, Col Okei Rukogota, who represented the Joint Chief of Staff, Maj Gen Leopold Kyanda, thanked the Youth for responding to the calls made by the various Heads of State of various countries to promote the message of the East Africa integration.

He called upon the participants to work closely to ensure that the integration of East Africa is achieved and noted that this activity is important to the UPDF because one of the objectives of integration is to have strength in Defence.