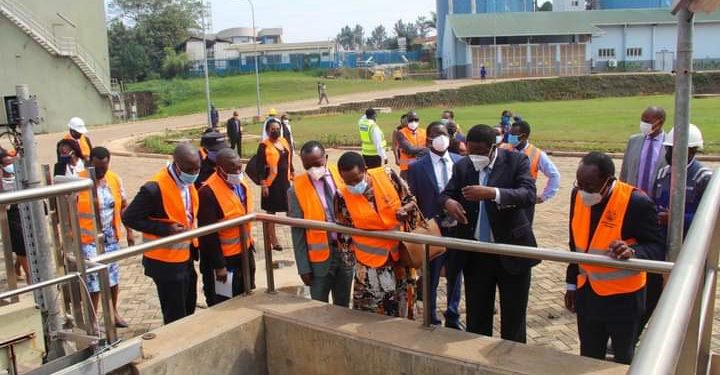 The new Minister of state for water Aisha Sekindi on Tuesday visited the largest sewerage treatment plant in East and Central Africa, at Bugolobi.

The plant will serve a population equivalent to over 850,000 people, treat over 45million litres of waste water including the dry flow from the Nakivubo channel before releasing water into Lake Victoria, produce manure, 630kw of power among others.

At the meeting, Hon Sekindi reiterated the Ministry’s commitment towards excellent water and sewerage services for all Ugandans across the country.

She said that her Ministry is working on a number of projects to accelerate service delivery and attainment of the SDG6, a key focus area for the Government of Uganda.

NWSC Board member and representative of the Permanent Secretary Eng Joseph Eyatu lauded NWSC’s performance and efforts towards water for all.

He highlighted environmental degradation as a challenge, that escalates the cost of water treatment.

The NWSC Board Chairman Eng. Dr. Prof Baddru. M. Kiggundu on behalf of the board, he pledged excellent services, strategic guidance and policy to propel NWSC to higher frontiers.
“We have completed works on a new corporate plan 2021-2023, which is anchored to the NDPIII and GoU’s commitment towards services for all.”he said

NWSC MD shared strides NWSC has made towards water for all since 1990;
•Areas of operation have grown from 5 towns in 1990 to now 256
•Population served has increased from 500,000 people to now 15million people.
•NWSC has moved from 18% service coverage to now 85%
•Network length has expanded from 300kms to now 20,000kms
•The revenue has grown from 4million USD to now 130million USD
•It had less than 200 employees in 1990. It’s now employing over 4000 Ugandans.
He added that NWSC is now focusing on water for all, introducing a prepaid metering policy and measures to curb water theft.