by Catherine Apolot
in National, News
7 1 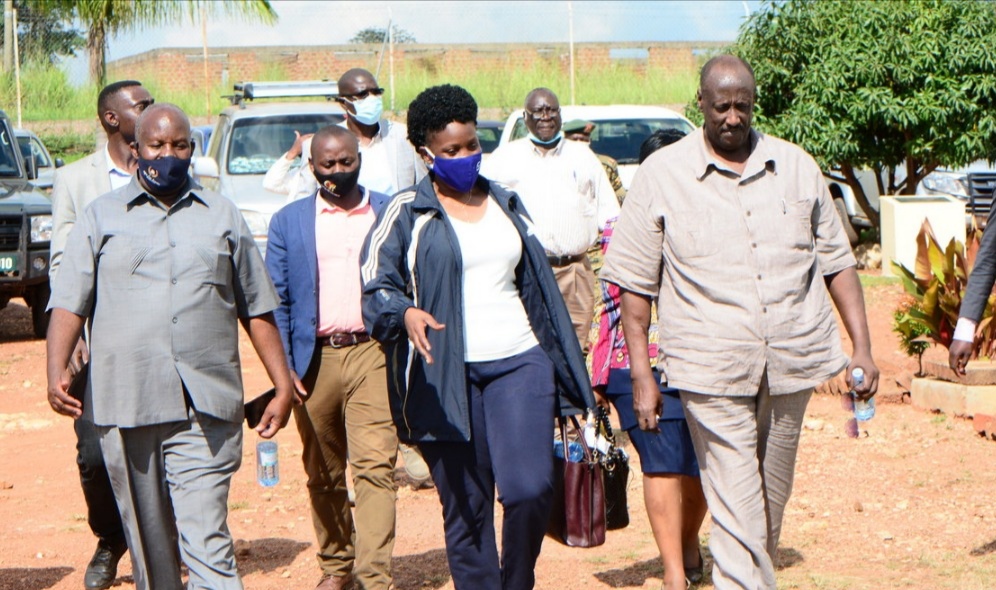 The Minister for Lands Judith Nabakooba has hailed efforts made by the Chief Coordinator of Operation Wealth Creation (OWC) Gen Salim Saleh in his continued support to Ugandan farmers in mechanising the agricultural sector and creating markets for the produce.

Nabakooba made the remarks during a ceremony in Purongo, Nwoya district on Tuesday August 10 where OWC was signing a Memorandum of Understanding (MoU) with Uganda Breweries Limited (UBL) that will see the latter providing ready market for cassava in the region.

The minister said Gen. Saleh has done a tremendous job in the region that has helped farmers get the most out of their produce.

Nabakooba who witnessed the signing explained that it (the signing) is a break through as farmers in the region are going to be connected directly to the market, and will no longer need to go elsewhere in search for it.

The farmers’ produce will be processed from the Purongo Grain Hub and bought by UBL. The hub will also be a one stop centre for farmers to access agricultural inputs to enable them get good yields.

“I want to salute Gen Saleh for the work done. From what I have seen this afternoon, I have realised that he has done a tremendous work in this region.Gen. we thank you for the commitment and energy put in to enable the people reach this far,” she said.

According to Nabakooba, through the MoU, farmers will at the end of the day be economically empowered and that is what they are looking up to as government.

“The president has been telling us to publicise and talk about the parish model that has been believed to change the lives in most homesteads. What Gen Saleh is doing in this area is what we are going to replicate elsewhere.”

Nabakooba also called upon the leaders in the region to encourage the rest of the community that have not yet embraced commercial agriculture to do so because it is one of the key areas that will take Uganda to greater heights just like President Museveni keeps saying.

“The beauty with your area is that your land is under the customary tenure system. You have a lot of land and maybe that is why you have managed to mechanise agriculture. Gen Saleh told me that this district is highly mechanised.”

Gen Saleh thanked UBL for helping him illustrate the practicability of mechanised agriculture from theory to practice.

He shared that when they (OWC) did research about who and where the farmer is in the power relations of the agriculture sector in 2017, they came up with the implementation of the logistics and industrial hub model as an empowerment tool.

“We did not know that three years down the line we would actually be witnessing it happen. This hub will be used as a tool for the farmer to leverage power. The farmer has land and labour, capital and equipment is sometimes hard for them but for the people in this area at least may be 70km radius can use this hub to access inputs and manage the outputs,” he shared.

Gen Saleh further stated that the partnership signed has a clear guidance on what they need to do and its signing is the beginning of future industrialisation in the area.

“The Industrial Hub in Kapeeka has shaped up, it also started from a grain facility like this one and today we have about 22 industries in that area.”

Alvin Mbugua the Executive Director UBL while signing the MoU said they have been on the journey of supporting local farmers in Uganda for the last 10 years.

He noted that throughout this period, they have been buying local raw material and substituting it for what they used to import from other countries.

“All our products are now 100 % produced from local raw materials. The more money we put into your pockets, will be the more money that will enter the economy of Uganda. We want to be part of a circular economy by building and buying Uganda.”

Tom Ociti Oryema the Secretary General Uganda Farmers Association asserted that they would want partners and agencies who deal in agriculture to look at this model (farming for ready market) and use it to change farmers’ incomes.

“The farmers must be trained to change mind-set and attitude. We have all along been farming for food security but from today onwards we shall get to know that we are going commercial and everybody will be growing when they know there is market.”