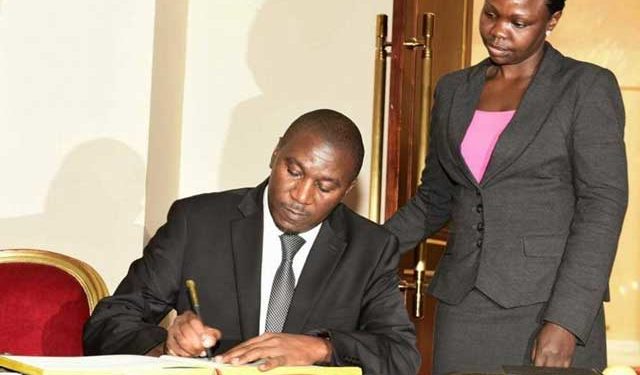 NITA-U had filed an application against UIA for giving the land, Volume MKO1176, Folio 11, Plot No. 1230, Kyaggwe Block 113, Namanve, Mukono District to RAINBOW Diary Uganda Ltd yet it was already under a lease agreement between NITA-U (Applicant) and UIA (1st Respondent).

On 27th January 2018, the applicant and the 1st respondent executed a lease agreement for a term of 5 years. The applicant was subsequently registered as proprietor of the land comprised in Leasehold Register, Volume MKO1176, Folio 11, Plot No. 1230, Kyaggwe Block 113, Namanve, Mukono District.

However, on 9th February 2021, the applicant’s staff found that contractors, agents and/or servants of Rainbow dairy Uganda limited (2nd respondent) had trespassed on the land and were clearing the land for the purpose of erecting structures. By letter dated 18th February 2021, the applicant made a complaint to the 1st respondent about the 2nd respondent’s trespass and activities on the land. The applicant also informed the 1st respondent that it still intended to develop the land.

The 2nd respondent opposed this application and they filed an affidavit in reply through its Managing Director-Kareem Jassani stating on 5th December 2019, it made an application to the 1st Respondent for land in Kampala Industrial Business Park (KIBP) for erecting a dairy and agro-processing plant. By a letter dated 5th May 2020 it accepted the 2nd Respondent’s application and made an offer to the latter of 2 acres of land comprised in Block 113 Kyaggwe, Mukono.

This move forced the applicant to file an application to the High Court seeking an order of certiorari to be issued quashing the 1st respondent’s Board decision to allocate the applicant’s land comprised in Leasehold to the 2nd respondent.

The applicant also wanted a permanent injunction restraining the 1st respondent from withdrawing the applicant’s land comprised in Leasehold Register, Volume MKO1176, Folio 11, Plot No. 1230, Kyaggwe Block 113, Namanve, Mukono District, allocating it to any other person, alienating or in any way dealing with the applicant’s land.

NITA-U also wanted a permanent injunction to be issued against the 2nd respondent, its contractors, agents and/or servants preventing them from trespassing, selling, transferring, alienating, and making any developments on or in any other way dealing with the land on the said land.

However, Justice Musa Ssekaana dismissed it alluding that it was not a proper case for judicial review based on the facts and it is purely a private law matter premised on the lease agreements executed between the parties.

He explained that the lease agreement made on 2nd October 2020 between the 1st respondent and 2nd respondent squarely puts the dispute of the applicant in the realm of private law that ought to be determined under land law and indeed may involve the cancellation of title which this court would not grant in the present application.

Justice Ssekaana added that the said transactions were purely contractual and based on the private law rights that are derived from the said agreements.

“Contractual obligations should not be enforced by judicial review unless the question is whether the contracting authority has exceeded its powers. As soon as a lease agreement is executed between the parties, they are bound by the terms of the lease agreement. This application is dismissed with no order as to costs.”

‘For government to take us seriously, we need to go on strike for two months’- Frustrated Maro tells fellow musicians