by Mubiru Ivan
in National, News
12 1 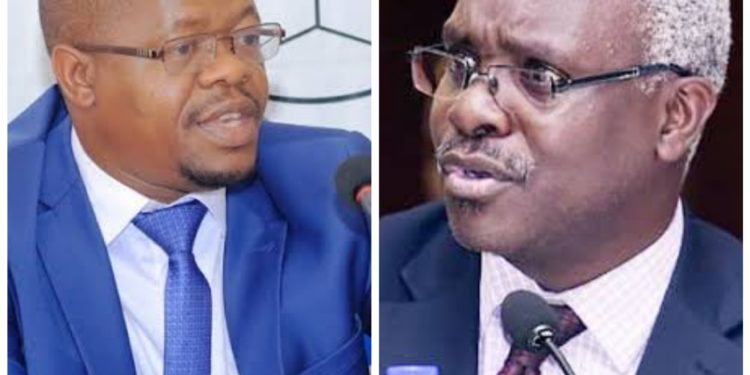 The two are rifting over the unceremonious return of Milutin Micho Sredojevic as Uganda Cranes Head Coach.

Micho who had been Uganda Cranes Coach since 2013, in 2017 terminated his contract with FUFA citing outstanding debt of salary and bonuses of Shs230million.

Now following the development, Kabushenga was prompted to ask Micho through a tweet whether this time round he has been paid in advance before accepting the new offer.

.@michocoach I hope this time you have been paid in advance. Unless of course you are returning as a volunteer. If they pickpocket you again don’t come here to make noise for us. https://t.co/HmPpjNdmEf

However, Kabushenga’s tweet rubbed Magogo the wrong way before throwing tantrums to the advocate of the High Court.

Magogo who is also the Budiope East MP told off Kabushenga that since he is the country head boy, he should avail the federation with his bank details so that they pay Micho through him (Kabushenga) for proper accountability.

With you as the country head boy, we will make sure that in this new contract we pay him through your bank account.

It looks like tweeting is your retirement hobby. Dot com era Jajja does not tell stories around fire places but tweets

Just provide us your bank details to be receiving the man’s salaries.

Thank you for the good job

Not ready to take in Magogo’s insults, Kabushenga retaliated:

.@mosesmagogo stupidity is not a badge of honor. It is not a good idea to wear it in full public view. But then again you are far too tone deaf to understand it https://t.co/L4j89Ux7pj

.@MosesMagogo in normal times you should be in jail & weightlifter Julius Sekitoleko should be an MP. But then God has played a cruel joke on us as a country & it is the other way round. But it takes a special kind of idiocy to make a mockery of it. I give up!!! https://t.co/7zbVAMMd0s

There is no amount of literature that takes away the fact that you got overrated for a long time.

Islamic teachings command us to be careful with people who once had power, money and lost them. Kabushenga might have lost one of these two.

Robert!!!Really!!!
You should actually try to find out the real saga about Ssekitoleko.
You seem to portray him as a martyr,yet he could be a “fugitive”!
Absconding from camp is the worst crime any sportsman can do!

This is not good! Both of you are leaders in our society that we hold in high esteem. You have a lot of people that look up to each of you. So please show exemplary leadership!

In the last 6 years @newvisionwire has not almost reported anything positive about Ugandan football bcoz of his secret wars with the federation and people are here feeling sorry for Robert, let him be told the home truth.
As an elite, he had no reason to post such a silly tweet

I don’t support @MosesMagogo for the decisions he sometimes make but is @rkabushenga also clean?
Is it that he left @newvisionwire with clean hands?
There are some scandals he was involved in during his time in vision group but byonna byaasirikirwa
To me these guys are the same