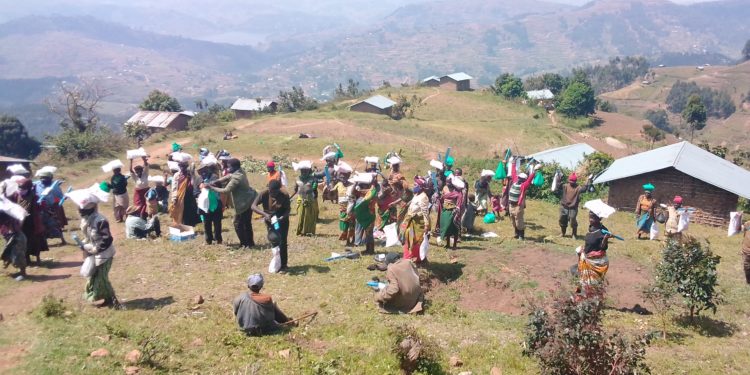 The donation event that was held in Rwamahano village and Murubindi primary school was the second batch after donating yesterday to 26 Batwa households in Butanda Sub County in Kabale District with each household receiving five kilograms of maize flour, 3 kilograms of beans, a bar of soap, a packet of salt.

The Executive Director of AICM, Precious Arinda Nabimanya, said that they received a grant from the Friends of AICM based in the United Kingdom to assist the Batwa communities in this covid-19 pandemic. He added that the donation that is targeting a total of 242 Batwa households from Rubanda, Kabale and Kisoro, intends to cost about 14 million shillings.

The Rubanda Resident District Commissioner, Peter Rubondo Rwakifari and the Kabale District Vice Chairperson Miria Akankwasa commended AICM for the relief donation, but asked the Batwa community to be self reliant by utilizing the little land they have to produce their agricultural products, than depending on donors, but further asked well wishers to continue supporting vulnerable people especially during this lockdown.

Alexander Kanyama, Valence Ndibatira, Michael Kakonkomani, Edward Mpagaze, Phiona Ruhangariho from Rwamahano and Murubindi Batwa Communities, in Muko and Bufundi Sub counties expressed happiness, saying that they have been feeding on herbs, and doing casual work from Bakiga community to food on table.

Who are the Batwa?

Originally, Batwa were forest-dwelling hunter-gatherers based in the Great Lakes region of Central Africa, and are widely accepted as the original inhabitants of the region.

As their traditional forest lands and territories fell under the control of agro-industries and conservation agencies, the Batwa became squatters living on the edges of society.

The establishment of the Bwindi and Mgahinga National Parks for Mountain Gorillas in 1991 enabled the authorities to evict the Batwa definitely from the forest.

The Batwa in Uganda (today) experience systematic and pervasive discrimination from the government and other sectors of society, and their rights as indigenous peoples are neither recognized nor respected.

Uganda Airlines tipped to save over ugx9.5bn IF it starts self-handling