EXPOSED: How suspended Uganda Airlines top bosses used to receive Shs36m per week as ‘token of appreciation’ from fuel supplier

The kickbacks were disguised as a commission, according to bank documents seen by this website. The money was being wired directly to the officials’ accounts through a foreign bank that has a branch in Entebbe.

by Stephen Kalema
in National, News
153 8 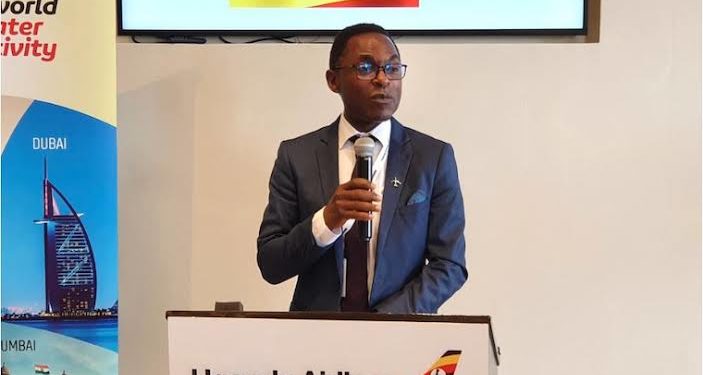 Two top Uganda Airlines officials who were suspended recently used to receive USD10,000 (about Shs36 million) as a weekly stimulus for awarding fuel supply contract to a company based in the Middle East, this Website has learnt.

The kickbacks were disguised as a commission, according to bank documents seen by this website. The money was being wired directly to the officials’ accounts through a foreign bank that has a branch in Entebbe.

It must be noted that Uganda Airlines has been paying fuel in advance (for a month) to enable the supplier to make refilling arrangements on time wherever the aircraft lands on the agreed airport across the world.For example, Uganda Airlines paid fuel for July on June 26.

As per the investigations conducted recently, the prime beneficiaries of this scheme at Uganda Airlines were Kenneth Kiyemba and Cornwell Muleya.

Who are these two?

Mr. Kiyemba is a Ugandan airline pilot and business executive who was among the first officers to be recruited by Uganda Airlines and served as a commercial pilot until his suspension last May.

“Muleya and Kiyemba being the first officials to be recruited and considering the power and seniority they wielded, they are the ones who negotiated the fuel supplying deal between the Middle East firm and Uganda Airlines,” sources at Entebbe revealed.

The pair was also on Uganda Airlines Task Force that sourced service providers/suppliers. According to the information obtained through our investigations, the duo had inflated fuel prices per route.

Sources said that the officials in new management have volunteered such information to a team of investigators from State House led by Brenda Wadri.

“The President is well aware of how this syndicate operated,” said an official.

It has been further revealed that the recent fuel crisis at Julius Nyerere Airport in Tanzania in which it was reported that Uganda Airlines plane ran out of fuel and delayed for over 1 and half hours was engineered by the clique conniving with Uganda Airlines station manager in Dar es Salaam.

The delay resulted from the new management’s decision to suspend advance payments to the fuel supplier from which the kickback would be sent to the beneficiaries.

“They decided to embarrass the national carrier because the new management plugged their holes of eating,” a source added.

Whereas the delay lasted for 1 hour and 45 minutes, the detractors exaggerated that the plane was stuck for 8 hours. The new management is reviewing its MoU with the Fuel Supplier and considering terminating the contract following the embarrassment. Equally, other suppliers/service providers had been subjected to offering inducements to other senior managers besides Kiyemba and Muleya. For example, the senior Manager in charge of Administration Andrew Tumusiime was also receiving “a good package” from the airport handler (names withheld).

“He had negotiated something from payments the Airline pays this airport handler and would receive money weekly,” a source said.

Museveni is aware of all these schemes that had been going on at the Airlines following the suspension of the top managers and he says the corrupt officials must face consequences.

The three-month suspension ends on August 21, and this website understands that State House taskforce will have finalized the investigation and it will hand over the report to the President for further direction.

State House officials linked to the investigations (but wished not to be mentioned) said implicated Airline officers could end up in jail for misappropriating public funds.