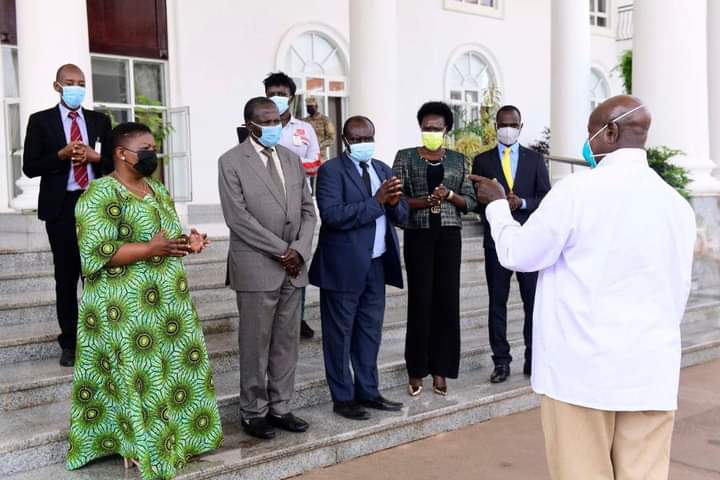 President Yoweri  Museveni has lashed out at Finance Minister Matia Kasaija over the delayed bus project which is meant to improve the mass public transport system in Greater Kampala Metropolitan Area.

According to Museveni, the project has failed to progress since 2019 because of corruption tendencies.

The President in a final push to get the project off the ground after three years of bureaucratic red-tape that threatened to sabotage it, on Wednesday summoned all stakeholders at Entebbe State House including Vice President Jessica Alupo, Minister for General Duties in the Office of the Prime Minister Kasule Lumumba, the Minister of Finance Kasaija, Minister for Investment Evelyn Anite, the Minister for Kampala Misi Kabanda, KCCA Executive Director Dorothy Kisaaka and the METU Bus Industries proprietor Metu Katabazi to address the matter.

“I handed this matter to the Ministry of Finance, Attorney Generals’ office but nothing moved. I hear some people asked for bribes. Later I heard that people from Finance wanted loans from Africa Development Bank but condition was that we import buses. How can we import buses? I have called you here to finish this today,” Museveni said.

“The idea of producing buses and trains in Kampala is to lessen the crowds and reduce piki piki. Katabazi says if you give me the concession to operate Kampala Services, I fabricate and operate here. KCCA doesn’t have to incur costs. He will recover his costs through operations. This will address the issue of too many small operations at zero budget for the government.”

While defending himself on why the project was delayed, Minister Kasaijja said it was because they were waiting for KCCA to work on the roads which are narrow and may inconvenience or cause accidents.

“Projects go hand in hand. We had to work on the roads and widen them for the buses to open. If roads are too narrow, they may cause inconveniences and cause accidents. I also wrote to the bank to inform them that the US$12million that was meant for importing buses should be added on the roads,” Kasaija noted.

The President was however not happy that the Finance Ministry was focusing on the roads and not the manufacturing sector.

“What I will not accept are contracts that make you import buses. There is no way somebody can tell me that peripheral roads are more important than factories. How can a planner equate productive capacity with a road especially manufacture of automobiles?” Museveni wondered.

On the other hand, KCCA Executive Director Kisaka assured President Museveni that following approval by the attorney general, the process has been completed after the signing of the agreement and MoU between KCCA and METU.

Recently Mr. Katabazi who embarked on a bus assembly plant in Kasese said they would invest US$50 million in the next five years and hope to build capacity to manufacture over 100 buses including the 4 metre city buses, 4.8 to 18 metre long buses for rapid transport for the GKMA including the Kampala city centre and the inner suburbs.

Among: Henry Waiswa to act as Clerk to Parliament until Adolf Mwesige's appointment is formalized