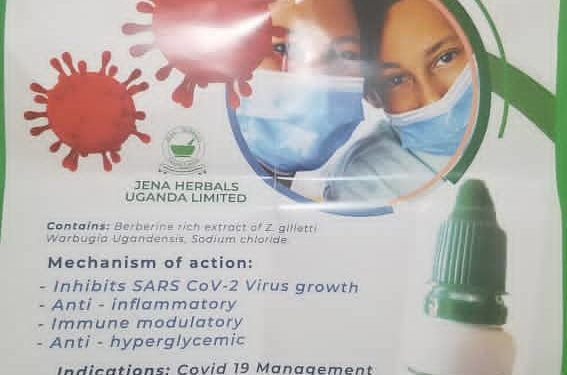 The National Drug Authority (NDA) has approved COVIDEX, a local herbal medicine as a supporting treatment for Covid-19 and other viral infections.

Addressing the media on Tuesday, the NDA executive director, David Nahamya said Tuesday that after various assessment and inspection of the factory manufacturing the herbal medicine, they have approved its use to treat the viral infections.

“NDA has granted COVIDEX an approval based on initial assessment, published literature and safety studies conducted by the innovator. The product has been formulated from herbal plants that have been traditionally used to alleviate symptoms of several diseases,”  Nahamya said.

Prof Patrick Ogwang from Mbarara University is the brain behind the herbal medicine, which is currently on high demand in different pharmacies and drug shops across the country over its alleged capacity to cure the pandemic.

Recently, Prof Ogwang explained that at least two of his colleagues recovered from Covid-19 with negative tests having used the drug for a period of about three days.

“Last year around December two of my colleagues in the university got severe covid with one admitted in hospital and put on oxygen. I gave them the formula which I call covidex and in 3 days of use they great improved and became negative,” Prof Ogwang disclosed.

“This year petronella called me about a colleague who was on oxygen due to covid and she requested for my help. I gave her 6 bottles which the patient and again in 3 days improved and was put off oxygen later tested negative and was discharged” he added, explaining the second “successful” effective application of the herbal drug.

Prof Ogwang further stated, “With increasing cases of covid I started getting many people calling for solution from me. I then began large scale production and many Ugandans are benefitting now. I will share messages from clients. So even though we are still carrying our more tests we now know that covidex has a natural compound that stops corona virus from multiplying.”

It’s should be noted that Prof Ogwang was the figure behind the development of number of effective vaccines such as Artavol – Artavoplus for malaria prevention and immune system strength, jenacof for coughs and flue, Jenacid – Jenapep for peptic ulcers, Jena Dm for diabetes, Jena HT for high blood pressure, Jena Sm for sickle cell disease among others all made from medicinal plants.

Ogwang (PhD) is a Professor of Pharmacy at Mbarara University of Science and Technology (MUST) whose focus of research is on testing, developing and producing medicines from plants based on traditional medicine knowledge in a mix with scientific laboratory evidence.

Adrian Nsubuga Sr: Why Arrogance led to France defeat at Euros while team with pedigree shall win it

Adrian Nsubuga Sr: Why Arrogance led to France defeat at Euros while team with pedigree shall win it