I’m going to advise Museveni to prepare for smooth transition of power, says Gen Tumwine as he resurrects succession talk

Former Security Minister Gen Elly Tumwine has revealed that he is going to advise President Yoweri Museveni to prepare for a smooth transition of power.

While handing over office to the new security minister Maj Gen Jim Muhwezi on Wednesday, Gen Tumwine said he is going to use his new advisory role to speak to the President about leaving power. 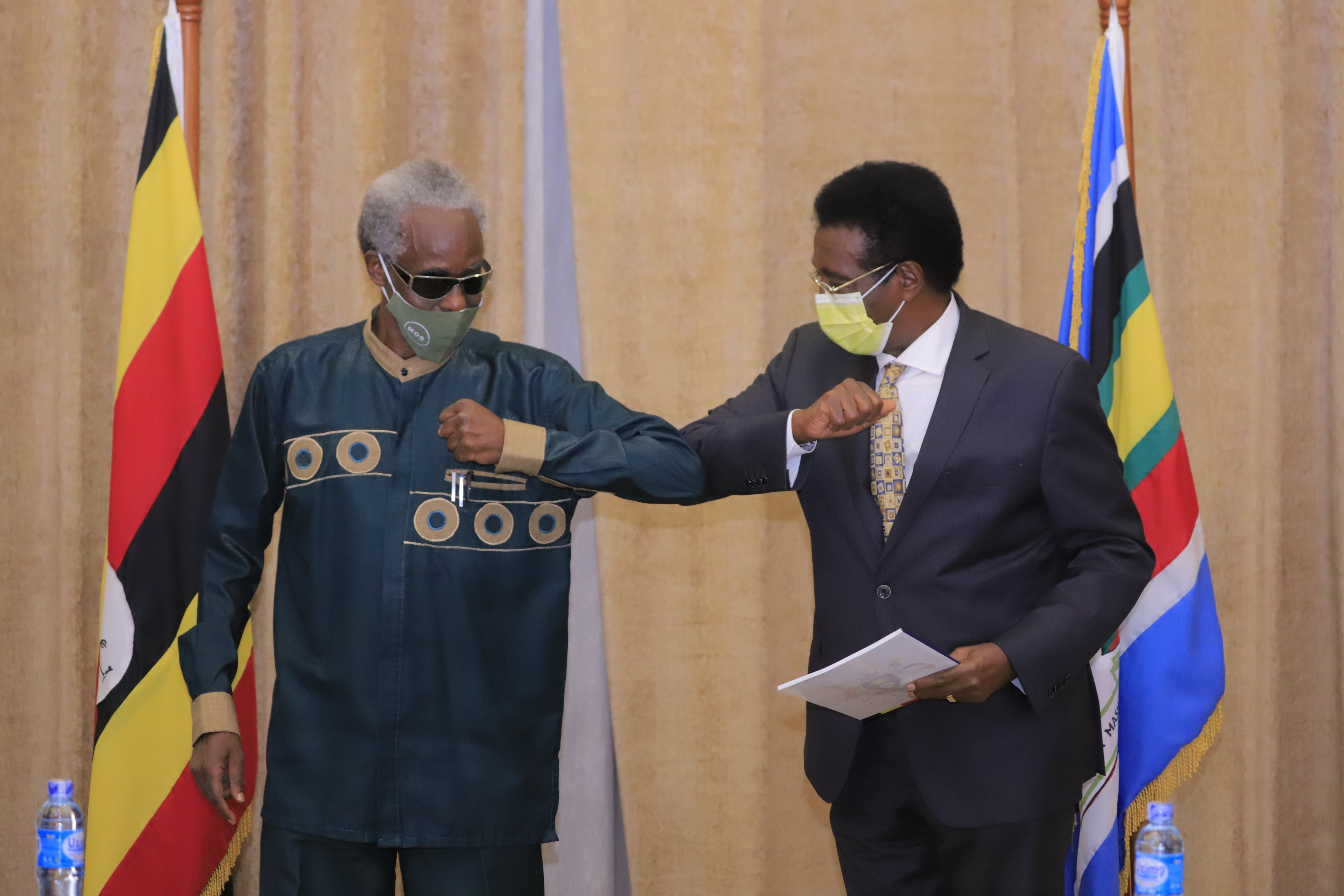 “I am happy to be handing over to Maj. Gen @jkmuhwezi, a friend and an old-time comrade .I promise my resolute commitment to you in executing your official duties at the Ministry. I am humbled to have served my country. I will forever be grateful to @KagutaMuseveni for being a visionary and excellent leader of the revolution,” Gen Tumwine who was appointed Senior Presidential Advisor on Security said.

“As I take on my new advisory role, I will advise @KagutaMuseveni to prepare for a smooth transition of power for a long-term stability of our country,” Gen Tumwine added.

President Museveni’s succession talk has been around for sometime and being 76 of age now, it’s widely been speculated that the President could opt to retire at the expiry of the current term as he will be 81 in 2026. As such, a debate on who will be the man or woman to reign in Museveni’s place after four decades will certainly be raging on untill 2026.

However, Museveni’s entire reign has been dominated by perennial anxiety regarding who will succeed him when he chooses to retire. In the process, a number of big names have over the years popped up, with former Vice President Dr Samson Kiseka (RIP) the first probable contender for seat. Others that have been famously considered are former Vice Presidents Specioza Kazibwe and Gilbert Balibaseka Bukenya, former Prime Ministers Apolo Nsibambi and John Patrick Amama Mbabazi, former Speaker Rebecca Kadaga among others.

Following a long wait, many contenders have either died in waiting or fallen out with the regime after realizing that their dream of taking over from President Museveni is not attainable.

It’s Prof Bukenya and former Prime Minister John Patrick Amama Mbabazi whose uncontrolled impatience made them taste the wrath of Museveni, with the former ending up in Luzira after openly declaring his determination to challenge his boss in 2005. He was dropped from cabinet, sought to run for the Presidency but barked out after being frustrated in the opposition which seemed not to trust him.

For Amama Mbabazi, arguably the most influential man in the ruling National Resistance Movement then after Museveni himself, holding the two pwerful positions – both Prime Minister and Party Secretary General, his story changed with the announcement that he would contest for the Presidency in the general elections of 2016. He lost the positions of Prime Minister and Secretary General before being badly defeated in the polls.

The two have since reconciled with Museveni.

In April last year, President Museveni maintained his stance on not having a succession plan in place, arguing that such was enshrined in the Constitution, which makes calls for him to name the person to take over from him irrelevant.

“The succession plan is in the constitution. You vote every after five years. There is no problem with the succession. If I say I am no longer running, the People of Uganda will vote,” he said during an interview.

Museveni also expressed confidence in his NRM party possessing a variety of able minded leaders for party members to choose from since it’s a party of unity unlike others like Democratic Party(DP) and Uganda People’s Congress( UPC).

Meanwhile, Gen Muhoozi Kainerugaba – the first son remains the only other candidate of choice to stand in the race after Museveni from within NRM.

The discussion on claims that President Museveni is grooming his son Lt Gen Kainerugaba to take over from him after he has chosen to retire has dominated debate on the president’s succession plan since former spy chief Gen David Sejusa alleged that there was a plan to eliminate top military and government officials opposed to what he called the ‘Muhoozi Project.’

Even then, the President maintains that although he had said he would not keep in power once he clocks 75 years of age, he has not yet fulfilled his agenda of unity, democracy, socio-economic transformation and Panafricanism. Until that plan has been achieved, the President seemed to say that he would not leave power unless he was voted out.

“Of course I am fit to run for the next election, what is the problem? Most importantly I am fit for my own life,” he explained.

This has prompted political analysts to opine that Museveni’s decision to desist from announcing a successor was a well calculated move to give his son Muhoozi enough time to get into the picture so as to be considered and believed in by Ugandans as the only man with capacity to lead the country his father will have managed for 40 years by the time he contests in 2026 when majority predict that Museveni will not be attempting re election.

Having been reappointed Commander of the elite Unit of the UPDF – The Special Forces Command, suggestions that Muhoozi could be edging closer to the Presidency has rightly gained a considerable traction. While he continues to serve as Advisor to the President, many have since opined that they youthful general is being exposed to the civilian aspects of managing society in time before his time comes, supposedly in 2026.

Tamale Mirundi: Museveni’s daughter Patience is not a qualified Pastor

Tamale Mirundi: Museveni's daughter Patience is not a qualified Pastor