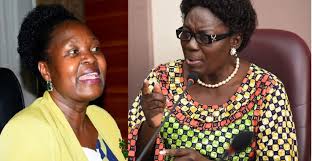 The President dissolved the old cabinet on May 3,2021 making it the longest period he has run the country without Ministers in the 1995 constitutional era.

Below is the full list of female cabinet and State Ministers :

Comptroller, in charge of Science,

Office of the President:

Office of the Vice President:

Office of the Prime Minister:

Ministry of Energy and Minerals Development:

Ministry of Water and Environment:

PRESIDENT AND CHAIRMAN OF THE