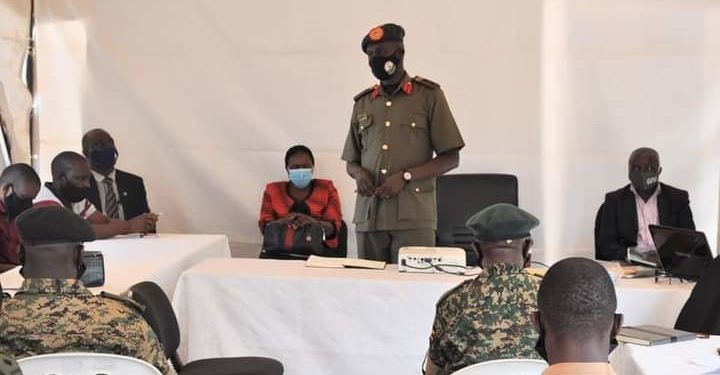 The Chief Executive Officer of UPDF’s Wazalendo SACCO Col Joseph Freddy Onata has challenged the WSACCO staff to embrace the training in order to fill skills information gaps that may arise in the execution of their tasks.

The CEO made his remarks while opening a 3-day internal training of 43 staff in Credit Management and Business Continuity at SACCO headquarters in Kiwatule Kampala a few days ago.

Col Onata called upon the students to open up their minds to developments in the industry as they study. He encouraged the participants to share ideas and make use of the facilitators in order to get the value of the training.

“We train you to expose you to new ideas and it is important for you individually to peer rate yourselves and judge how you have been performing because putting much in training you means we expect much from you in furtherance of the growth of the institution. The people we serve are people who expect much from us, ” he said.

The CEO also urged students to go and share what they have studied with their fellow workers who did not participate in the training. He said that such trainings are continous and that those who were not considered now also will be catered for in the near future.

Col Onata applauded the facilitators for their contribution by partnering with WSACCO through trainings which he said is the best way they can contribute to the stability of the country by grooming staff into important citizens .

In his concluding remarks he noted that where Wazalendo SACCO has reached does not concentrate on giving out loans as a priority but emphasizes developing the minds of the staff through mentoring, Coaching and training which said will enhance their performance and hence creating impact to the welfare of members and contributing to development of uganda as a whole .

The Director Finance and Administration Lt Col Buha Magero while speaking to the students who attended Business Continuity course ,encouraged them to keep focused and value any opportunity rendered to them in form of training if they are to excel in service delivery even when they are out of WSACCO. He added that its not all about occupying offices but also foreseeing whether their input in the institution will keep it standing and can still afford to support their welfare .

On behalf of the facilitators , Mrs Alice Nyangoma who is a consultant from the Institute of Internal Auditors said they were delighted to be invited to share experience with Wazalendo, to learn from each other for the staff to be able to complete the puzzle of work at different levels.

She appreciated WSACCO Institution for the high standard it has set in being exemplary to other SACCOs in the country and added that it felt good partnering with it to help others grow.

The 43 students were officers, men and civilians representing all the branches of WSACCO.These were in two categories; 13 attended Business continuity training and the 30 are attending credit management training . The facilitators were drawn from the institutes of Internal Auditors ( For Business Continuity Training ) and Institute of Bankers ( For Credit Management Training ).

Here are Uganda’s Leaders of Opposition since 1961

Here are Uganda’s Leaders of Opposition since 1961