Museveni: Anybody who tries to interfere with us, we shall fight him 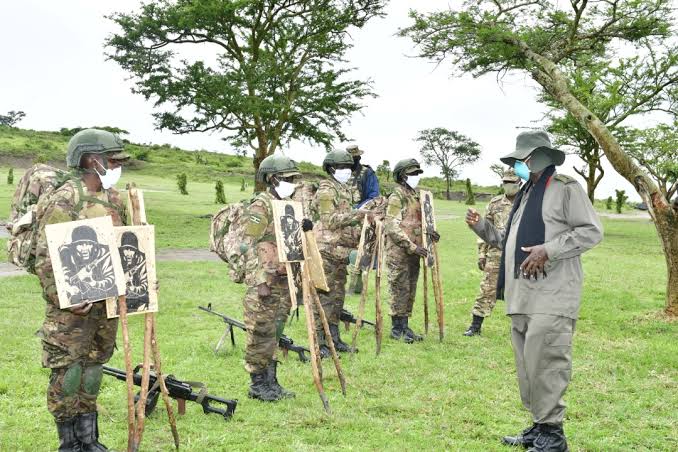 President Yoweri Museveni who is also the Commander in Chief of the UPDF a few days ago transformed the first Commando Battalion into a brigade and urged the commanders to fight for a reason for their country.

“I Congratulate the first Commando Battalion which has now grown into big force. Will transform you into a brigade and will be able to appoint some commanders for the battalions and brigade itself. What you need to do is ideological studies. Fighting is for a reason. We don’t fight because we are cowboys. Me I am not a cowboy. I don’t enjoy fighting but I don’t fear fighting. If you want to fight, then we sought out the issues. But really, I want to look after cows. That is what am more interested in and also do crops, banana, coffee.. in Ntugamo,” he said.

The President was on Friday May 7, presiding over the pass out of specialized sniper commandoes and an enhanced manpower commando force at Camp Rufu, headquarters of One Command battalion and Special Forces training centre in Kiruhura District. The President who was accompanied by the First Lady and Minister of Education and Sports Janet Kataaha Museveni also witness demonstrations by battle hardened commandoes who showcased their daring professional skills.

“If somebody forces Africans to fight, they will fight. We don’t fight because we enjoy it, we fight to improve ourselves. We don’t want somebody to come and stop us from improving ourselves. Foreigners came and colonized us what were they looking for? We had tribal chiefs who didn’t see far but now we know what to do. Anybody who tries to interfere with us, we shall fight him. And we shall defeat him because we are fighting for justice. We are not aggressing anybody, we are just in our land. Unawumwa nini? Kiki ekikusiwa, noribwa kyi? I am in my land, this is our land, the land of our ancestors,” he said.

“Apart from combat skills you must assimilate our ideology the way we look at things. When we fight, we fight for a cause. All armies have causes. The colonial army was an army for colonial control, the pseudo army of kings and chiefs, their ideology was pseudo. Our ideology is patriotism, love Uganda. That is why am happy to see you are all from all parts of Uganda. You are a national force. For us, we care more about loving Uganda, loving Africa, Pan-Africanism and social economic transformation,” he said

The President said he wants the whole of Uganda to undergo social economic transformation so that they become modern people.

“We can’t have a peasant producing another peasant. That’s why we are insisting on free education. Therefore, apart from combat skills you need to emphasize ideology,” he said.

The President said Hon. Janet and himself are very happy to witness the pass out of the two groups, the snipers and enhanced manpower for the commando force.

He said NRA/UPDF has gone through a long history of building any additional capacity that adds value to the force.

“The Mobile force won all the decisive attacks in Masindi 20 February 1984, Hoima 30th June 1984, Kabale, Hoima, Kabamba on new years’ day 1985 and the big battle that defeated UNLA at Kembogo, Rubona and the strategic counter offensive that resulted in capture of Kampala. It was done by the battalions of the mobile division that time,” he said.

“The main thing about fighting is being very well trained so that you are confident of your weapon. The biggest skill in fighting is kutambua na kutumiya cover. If you can be able to identify cover and use it effectively so that you are protected and hit the enemy, you can fight any war,” he said.

The President said some of the major battles won by the One CommandO SFC Commandoes included that of the ADF.

“The ADF Operation was a very good because the ADF had come with 100 people and from figures they told me, only 13 went back. From that time, ADF has never come back to Uganda. They send infiltrators but never as a force,” he said.

The others included the snipers in Mogadishu who scattered the al Shabab at Xcontrol Baradi junction east of Mogadishi and Afogoyi. And at the Bridge of Afogoyi and also saved members of parliament when it was attacked.

According to the President, recently during the insurgency in Kampala the Commandoes did a thorough job to contain the situation.

“I have been seeing people talking nonsense, that SFC did bad things. They didn’t do bad things. I got intelligence about these confused people saying how they are going to kill people, stop elections from taking etc. I called some elements of commando from Nebbi. What they did is well documented. They did a thorough job and broke the back of insurgency. Anybody not happy with that must be enemy of Africa,” he said.

The CDF General David Rubakuba Muhoozi described the training as consistency of emphasis of readiness through continuous training and rehearsal to perfect skills.

“We thank your insistence on an appropriate training environment. We thank you for waking us up,” he said.

The SFC Commander Muhoozi saluted President Museveni for his vision in setting up One Commando battalion 15 years ago. From a force of 250, it has grown to this mighty force you see today. It was created by radio message on 27 june 2006. In September you ordered me to camp with them in Baralege, re-train and create one commando battalion.

More importantly it performed brilliantly against LRA, ADF in Bundigyo, in Mogadishu against Al Shabbar and also against so called white army in rebels in South Sudan,” he said.

“Today present one officer and 40 other ranks that have been taking a sniper course for six months at Singo. The team is big enough to support UPDF in any combat engagement in Uganda and across borders. The second is group of 19 officers 1196 other ranks making 1215 warriors among them one lady officer and 14 lady soldiers the first lady commandoes ever in unit group has ever had, he said.