by Lawrence Kazooba
in News, Politics
41 0 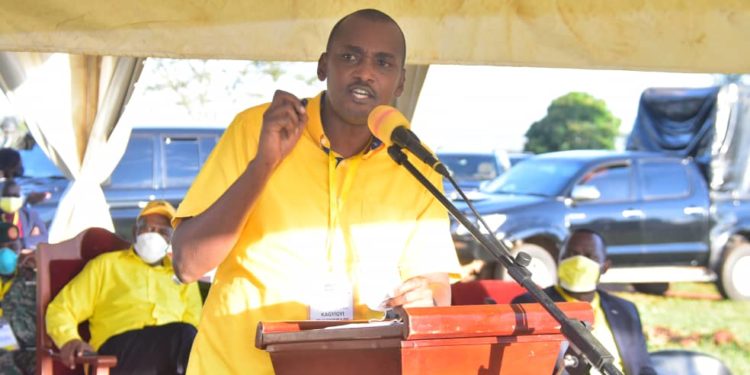 Minister Tumwebaze speaking during the retreat in Kyankwanzi

Gender Minister Frank Tumwebaze has told new legislators of the ruling national resistance movement to shun the ‘silent majority’ slogan popularized by singer Bebe Cool. He advised them to use new media to voice out their messages and brand themselves.

Mr Tumwebaze was addressing new MPs in the ongoing party retreat in Kyankwazi where he spoke about “Leveraging the media and communication tools for effective political advocacy and mobilization”.

Mr. Tumwebaze who is one of the most eloquent ministers, said, subscribing to the ‘silent majority’ motto was tantamount to political suicide, which disadvantages NRM leaders before their constituents and most likely lead to their losing future elections.

He warned that failure to tell their political stories in a proactive manner, their opponents will tell it on their behalf and do so in a distorted manner aimed at maligning them.

This next parliament is likely to be confrontation given the fact that NRM and Opposition MPs have both moved away from being the usual passive politicians to leaders who seek visibility at every opportunity. This has been made more easier with social media tools which give every person an equal chance before their followers.

The former ICT minister was invited by NRM Secretary General Ms. Justine Lumumba at the National Leadership Institute Kyankwanzi to speak about how new legislators can use social media to brand themselves and their ideas.

Mr Tumwebaze’s moving lecture which was well received by MPs comes at a time the government of Uganda has blocked Facebook for the last three months. The government is also moving to increase taxes on data, which will put the cost of data one of the highest in the world.

Mr Tumwebaze’s paper proves that media and digital media in particular have become a very important aspect of leadership dynamics. The debate on that level also makes it easy for advocates for affordable communications to push through their voices since they have reasonable voices in the ruling party who can back them.

Mr Tumwebaze one of the ministers who follow global communications trends, advised MPs to leverage communication platforms (traditional media & new media) for their own political visibility and personal political branding.

With many new MPs being young, Uganda is likely to witness more outspoken politicians. Tumwebaze said that to remain relevant, they ought to engage proactively on social media, do research so as to equip themselves with information that will enable them to engage in quality debates both on the floor of parliament and in the wider mass media.

Mr Tumwebaze advised each MP to have at least an active Twitter and Facebook handles operated perhaps by self to enable them to connect with their constituencies. He added that there was a need for each politician to periodically plan for media appearances both in their local and national media.