by Catherine Apolot
in National, News
4 0 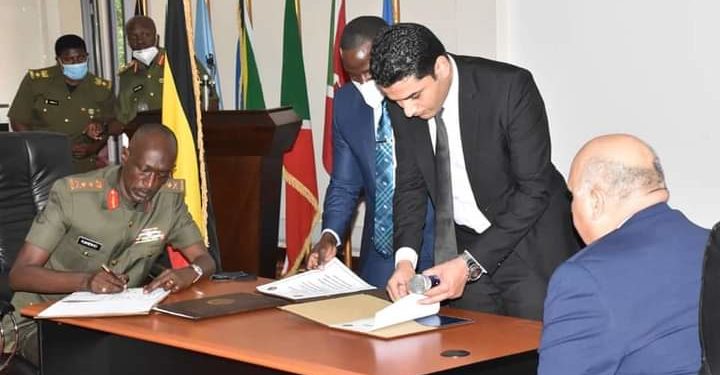 The Egyptian Intelligence Department(MID) has signed a memorandum of understanding with its Ugandan counterpart the Cheiftaincy of Military Intelligence CMI in a meeting held at the CMI headquarters in mbuya.

The MoU is a follow up of the first meeting the two agencies held in Cairo-Egypt in December 2020.

The chief of Military Intelligence Maj Gen Abel Kandiho who signed on behalf of the agency noted that, the agreement will see the two agencies share resourceful intelligence on a regular basis which is key in combating terrorism among other crimes.

He further thanked the Egyptian government for always supporting the Ugandan Army in training.

Before inviting his guests to the CMI headquarters for signing of the MOU, Maj Gen Abel Kandiho together with the Chief of Personnel and Administration (CPA) Maj Gen George Igumba first hosted the delegation to a dinner on Tuesday evening at Serena Hotel-Kigo. Other UPDF General officers who graced the dinner included; the Chief Political Commissar (CPC) Maj Gen Henry Matsiko, the Defence Spokesperson (DSP) Brig Gen Flavia Byekwaso, among other senior ranking officers from the UPDF.

The Egyptian delegation which is in Uganda on a four day visit, got into the country on the 4th-April-2021

The signing of the protocol was witnessed by the Egyptian Defence attaché to Uganda Brig Gen Osama Salim, the Deputy Chief of Military Intellince Brig Charles K. Asimwe and other senior officers from both the Ugandan and Egyptian intelligence agencies.