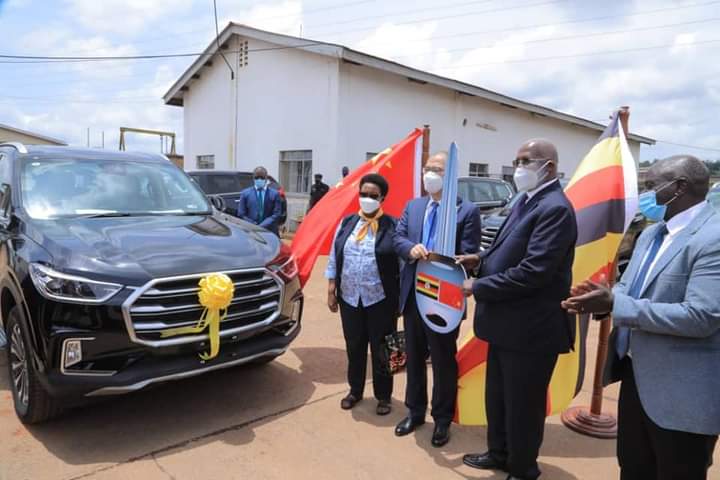 Minister Kutesa receiving the 70 SUV cars from China on Wednesday

Speaking at the handover ceremony that took place at the Ministry of Works,  Sam Kutesa , the Minister of Foreign Affairs who officially received the fleet of vehicles conveyed a message of gratitude on behalf of the Government and People of Uganda for the vehicles donated by the Government of the People’s Republic of China.

The Minister emphasized that Uganda values the historic, progressive, excellent bilateral relations with the People’s Republic of China and remains committed to deepening them further in the political, security, economic, social, cultural and scientific fields.

Kutesa thanked Amb. Zheng, and the Government and People of China, for the support that China extended to Uganda to host the 3rd G77 summit, with the provision of these 70 vehicles and also the accreditation equipment. He highlighted that these fleet of Motor vehicles were negotiated for by the Amb. Zheng and hailed him for his fruitful and result oriented tour of duty.

The Minister noted with regret that the G77 Summit which was scheduled to take place in April 2020 in Kampala had rescheduled to a later date due to the outbreak of COVID-19 pandemic. He also gave the reassurance that Uganda will host this Summit in the not too distant future and that Uganda looks forward to receiving a high level Delegation from the People’s Republic of China.

The minister further applauded the People’s Republic of China for its solidarity Cooperation and support to Africa and Uganda in particular, in mitigating the impact of the COVID-19 pandemic.

In his remarks Amb. Zheng, reaffirmed that the Government of the People’s Republic of China values the Comprehensive Cooperative Partnership with Uganda, and is committed to its continuous support to our development agenda.

The Ambassador noted that this donation of vehicles and accreditation equipment is a sign of China’s good will and support to Uganda under China- China development cooperation framework.

Amb. Zhuqiang also expressed gratitude to the Government of Uganda, for the immense support and cooperation that accorded to him during his tour of duty.

He further pledged more support from the Government of China to Government of Uganda to boost Technical cooperation between both countries.

Gen. Katumba Wamala, the Minister for Works and Transport also thanked the Government of China and the Ambassador for the fleet of vehicles that was donated to Uganda and pledged to ensure efficient maintenance and management of these vehicles that are significant addition to the Government fleet.

He further commended the out going Chinese Ambassador for his effective leadership highlighting a number of initiatives and projects in the Transport sector that over he saw and implemented during his tenure notable projects like completion of the Kampala-Entebbe Expressway highway, the on going expansion of the Entebbe International Airport to mention but afew.

In conclusion, Hon. Katumba also thanked Hon. Sam Kutesa and the staff of the Ministry of Foreign Affairs for sourcing and making necessary arrangements for handling over the vehicles but also negotiating a number of Infrastructure Development projects