by watchdog
in National, News
4 1 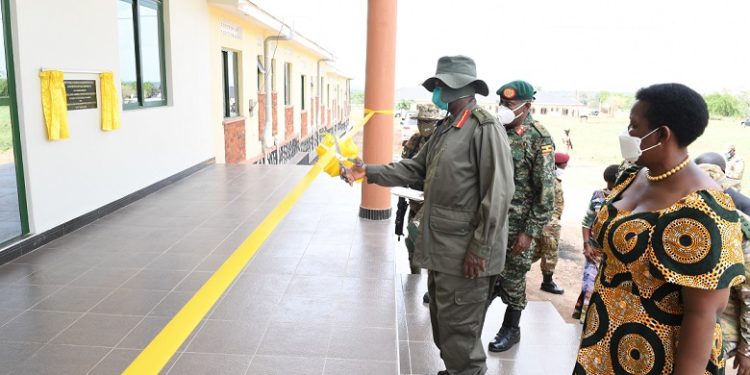 NALI, KYANKWANZI: President Yoweri Museveni has commended the Minister of the Presidency Hon. Esther Mbayo for selecting the Engineers Brigade of the Uganda Peoples Defense Forces (UPDF) other than private contractors to build the new state of the art facilities at the National Institute of Leadership (NALI) at Kyankwanzi in Kyankwanzi district.

“I want to congratulate the Minister of the Presidency for putting her foot down in the matter of selecting the Engineering Brigade to do the work here rather than private contractors. That was a good decision and I congratulate you,” he said.

The President was on recently commissioning the Shs 7.9bn state of the art accommodation halls as well as the new administrative

Building at the National Institute of Leadership Kyankwanzi.

President Museveni described the practice of using private contractors as a great wastage of government resources. He expressed need to fight such groups of people whose actions are tantamount to parasitism and are criminal.

“We must fight this parasitism because this parasitism is by people in charge who just squander resources of the people with private companies which they are linked to instead of providing solutions to people’s problems,” he observed.

He pointed out that some of the old Senior Secondary Schools in Uganda like Ntare, Teso College Aloet and Sir Samuel Baker, which stand up to today, were built by the Ministry of Works.

He emphasized the need to have Engineering Brigades in various government institutions to maximize expenditure on construction works.

“When you use the Engineering brigade they just spend money on the materials,” he noted.

The President also approved the names proposed by the Director of the Institute Brigadier General David Kasura-Kyomukama that include Thomas Sankara Hall, Herbert Chitepo, Agustino Neto, Patrice Lumumba and Kabral Halls in memory and recognition of their contribution to the freedom of Africa.

“I totally approve the names proposed by Brigadier Kyomukama, all those are historical African names. People who contributed to the freedom of Africa,” he said.

The Minister of the Presidency Hon. Esther Mbayo urged the government to award more building contracts to the Engineering Brigade of the UPDF for their professionalism.

She called for a medical facility to be built at the Institute as well as a water reservoir.

The Director of the Institute Brigadier David Kyomukama said the new Thomas Sankara hall has 36 self-contained rooms and 2 VVIP rooms. The other 4 halls each have 20 self-contained rooms. He added that the objective is to transform NALI into a National and Internationally rated Institute of Leadership.

He further announced that the Institute is also developing an administrative block with a capacity of 300 people.

He added that the facility has a 6 syndicate rooms, a library, a computer room and a restaurant.

Brigadier Kyomukama thanked President Museveni and other patriotic Ugandans for supporting the Institute.

The ceremony was attended by among others the Head of Public Service Mr. John Mitala.