Sempala was left with nothing to do apart from shedding tears outside his house main gate. 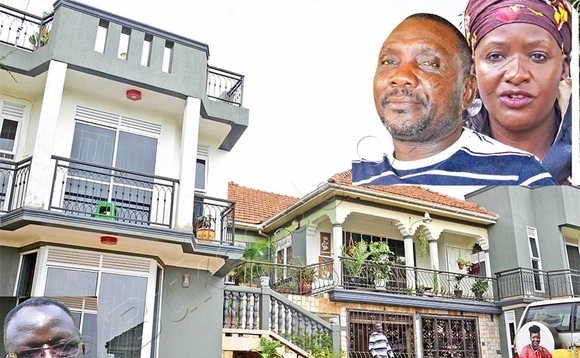 The outgoing Kampala Woman MP Nabilah Naggayi Sempala has kicked her husband Isaac Sempala Ssebagala out of their Buziga home.

The incident happened on Wednesday evening where the former Kampala Lord Mayor candidate with the help of security operatives forcefully locked Sempala out of the contested property.

Sempala was left with nothing to do apart from shedding tears outside his house’s main gate.

Early this month, Sempala collapsed after Nabilah went with police officers to read a Court order evicting him from their posh home.

The property in question was allegedly used as collateral by the couple to acquire an Shs850 million loan from former Makerere University Vice-Chancellor Prof Venansius Baryamureeba which they later failed to pay.

Out of the Shs850 million loan secured between 2013 and 2015, Nabilah and her husband managed to pay back only Shs50 million. This prompted Prof Baryamureeba to claim the property amid contention from Sempala who alleged that the former and the outgoing Kampala Woman MP were conniving to steal his house since he knew nothing about the outstanding loan.

On seeing his wife with police officers, Sempala’s blood pressure rose up and collapsed. He was admitted to Mukwaya General Hospital along Nsambya-Ggaba Road.

The embattled husband was only saved by a court injunction that ordered Baryamureeba and Nabilah not to take over the property.

“An exparte interim order is issued restraining the respondents (Baryamureeba and Nabilah), their servants, agents and persons claiming under them from entering upon the suit land, evicting the applicant and his agents, selling the suit land, transferring the same into their names or from doing any act on the suit land injurious to the rights of the applicant until 17th March 2021 when the miscellaneous application no. 439 of 2021 will be heard Inter parties,” Nabakooza Flavia, the Deputy Registrar said in an interim order dated 12 March.

However, after the court order expiration (17 March), Nabakooza ruled that Sempala can continue to have ownership of the Buziga house until the Commercial Division of the High Court has disposed of the main case.

Robina Rwakoojo: Why I want to become the next Deputy Speaker of Parliament