UPDF flags off 2,000 soldiers for one year peacekeeping mission in Somalia

by Stephen Kalema
in News
2 0 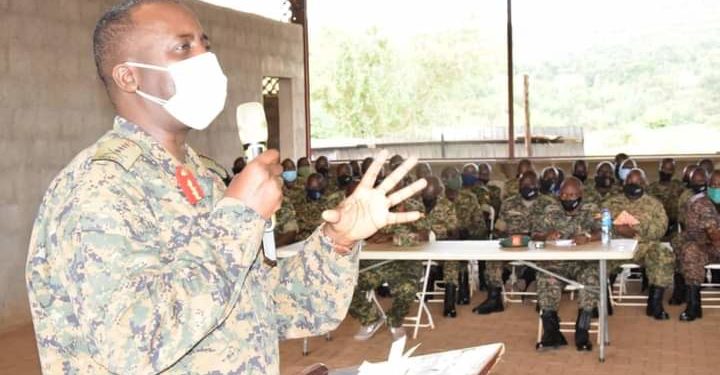 The Chief of Defence Forces (CDF) of the Uganda People’s Defence Forces (UPDF), General David Muhoozi, flagged off 2,416 troops for a one year peacekeeping mission in Somalia. The function was held at Peace Support Operation and Training Center PSO-TC) in Nakaseke District.

The departing troops under the command of Colonel Jonathan Ochom are Uganda’s thirty second battle group deploying to Somalia since March 2007.

General Muhoozi urged the battle group to be true ambassadors of Uganda through exemplary performance; following on the footsteps of the previous battle groups.

“You our new ambassadors in the mission must maintain the tempo of the operations set by your predecessors to ensure continuity on the journey to peace in Somalia,” said Gen Muhoozi.

He reminded the troops to observe discipline, follow the Standard Operating Procedures of the mission, and ensure a healthy living by paying close attention to the preventive measures of all disease.

The Commandant of the PSO-TC, Brigadier General Bonny Wolimbwa said the battle group had received close to a year of pre-mission training and that it was in a good state to deploy in Somalia.

He noted that the deploying battle group was the first to be trained by purely Ugandan instructors.

“The deploying troops have demonstrated high levels of military competencies and will therefore be reliable in contributing to the achievement of the Mission’s intended objectives,” he said.

Uganda contributes over 6000 troops to the African Union Mission in Somalia.

How Long Does It Take to Become a Successful Forex Trader?