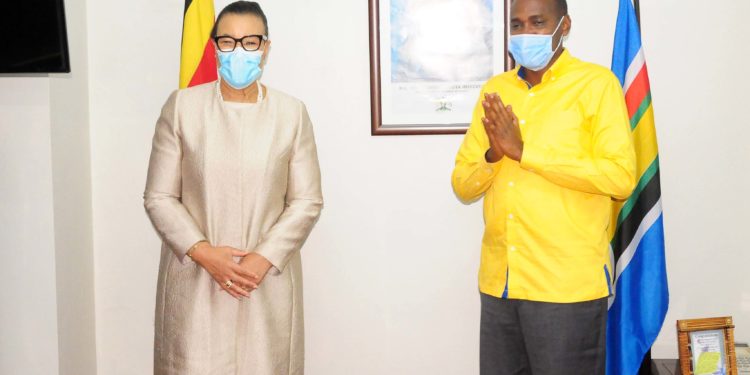 The Minister of Gender, Labour and Social Development, Hon. Frank Tumwebaze on Wednesday met with the Secretary General- Commonwealth Secretariat, Rt Hon Patricia Scotland, during which they discussed a wide range is issues concerning youth, women and girls.

The meeting held at the Ministry headquarters was attended by among others the Minister of State for Youth and Children Affairs, Hon. Florence Nakiwala Kiyingi, the Permanent Secretary, Mr. Aggrey David Kibenge and the Director Social Protection, Mr. James Ebitu.

The Commonwealth team also included the Senior Director, Governance and Peace Directorate, Prof. Luis Franceschi and his advisor, Erin Tunks, among others.

The deliberations centered more on the increasing cases of Gender Based Violence (GBV), especially during the COVID-19 pandemic, and the plight of youths who constitute the biggest percentage of Uganda’s population.

Scotland noted that GBV, specifically Domestic Violence, has an economic cost as it increases Government expenditure, lowers productivity and results in a host of other long-term effects on survivours.

According to a recent study on the cost of responding to Domestic Violence in Uganda, health care providers are estimated to spend about UGX 18.3 billion annually to deal with the effects of GBV, police UGX 19.5 billion while the local councils spend UGX 12.7 billion.

This does not account for the loss of productivity or other longer term impacts of Domestic Violence.

Scotland implored Uganda to emulate the United Kingdom, which she said had decreased the cost of dealing with Domestic Abuse by over 10% between 2004 and 2020.

She suggested the strengthening of skills development among the different stakeholders- private and public, creation of jobs in the ICT sector and women economic empowerment as avenues of bringing down the cost of GBV.

She also called for the stronger funding of the Social Development Sector since the investments would directly benefit women and girls and consequently reduce the dependency syndrome.

Hon. Tumwebaze, who has been passionate about ending GBV, said he was increasing focus on ensuring that duty bearers along the GBV referral pathway play their roles in support of victims.

He regretted that many survivours don’t get the redress deserved because some of the duty bearers deliberately neglect the GBV cases brought to their attention.
He called for a collaboration with the Commonwealth Secretariat in strengthening the tracking and management of GBV cases.

Scotland is in the country with other delegates as part of the preparations of the upcoming Commonwealth Heads of Government Meeting (CHOGM) to be held in Kigali, Rwanda from 21-26 June 2021.

The meeting will be held under theme: “Delivering a Common Future: Connecting, Innovating, Transforming.”
The key priorities for the meeting will be: Governance and the Rule of Law; Sustainability (economy, trade and environment/climate crisis); Health; Youth; and Technology and Innovation.

Could it be covid-19? What really killed President Magufuli?