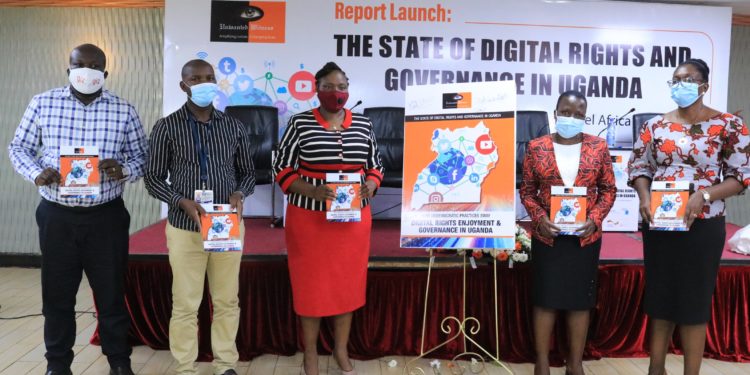 Uganda’s internet usage has grown in recent years with over 10 million users. The  usage provides a new digital landscape that facilitates the work of human rights defenders, activists, journalists, minority groups and citizens.

However, for over 10 years, research reports have showed that as internet usage increases, the more the state continues to violate citizens’ digital rights.

Speaking during a report launch on Friday in Kampala, Dorothy Mukasa the Executive Director of Unwanted Witness Uganda said that each day that passes by, there is an increase in violation of people’s rights by the state.

She noted  that some of the issues stopping people from enjoying their digital rights include the unfavourable national legal policy framework and ignorance of the policy implementors.

“The rationale for the research was to explore the loopholes within the national legal framework which are: perpetrating surveillance, personal data and privacy intrusion, arrest, kidnaps, online Censorship that limits the development of good internet governance principles. Human Rights enjoyment benchmarked on International and Regional legal standards,”Ms Mukasa said.

The report titled ‘The state of digital rights and governance in Uganda’ showed that the introduction of the Over The Top (OTT) tax for all internet users has made the internet experience to become very expensive for an ordinary citizen.

Research which was made by Facebook in 2017 indicated that Ugandans spend an average of Shs9000 per month on the internet therefore the introduction of Shs6000 OTT per month eroded the number of users from the map.

Inadequate consideration of the public in the Cyber laws formulations hinders effective implementation and entrenchment of these rights to marginalized groups and people with disabilities.

The state has also failed to monitor the set policies towards internet use, there is limited awareness of government policies especially in the rural and upcountry town on ICT governance in the country. For example, most of the government ICT initiatives are in urban areas.

Denial of freedom of speech on social media is also another factor. This is through regressive regulations and intimidations by the state actions like Police, yet there are also no clear laws set to address the issues that arise from internet use such as cyberbullying, hacking among others.

Arbitrary arrests and passing of laws that curtail freedom of expression, such as like Public Order Management Act have been used by the state to take away digital rights from Ugandans.

According to the report, to overcome factors hindering Ugandans from enjoying their digital rights, the government through the Human Rights Commission and ministry of justice should promote universal access to legal aid for all citizens regarding digital rights which will ensure a just and fair due process.

The government through relevant arms like Parliament, ministries and local governments should translate the laws and regulation into simple guidelines to read and understand. This is an empowerment tool for citizens to claim their digital rights.

The report also calls on the Ministry of Education to integrate digital education into the curriculum of computer literacy at various levels of education as a means of promoting responsible use of the internet and associated technologies.

Abdul-Salam Waiswa the head of the legal department from the Uganda Communications Commission (UCC) while reacting to the report findings and recommendations said, “Unlike other rights where people just speak, for digital rights, one must pay since there is somebody who is making it able for you to communicate. That is why UCC has come up with interventions to ensure that the cost of internet is low,” he said.

On the shutting down the internet during elections, Waiswa said that it was done in for security purposes.

“Nobody is proud that internet was shut down, and I think right from the highest level even his Excellency, I think he apologized to the nation, but it was done to secure the stability and security of our nation because at the end of the day only people who breathing can enjoy digital rights.”

JAFFER A’ITA JOEL: 11 things to do in your 20s and early 30s so that you can retire comfortably in your 40s