We shall not apologize for arresting, detaining opposition criminals- Minister Jeje Odongo

by Stephen Kalema
in News, Politics
6 1 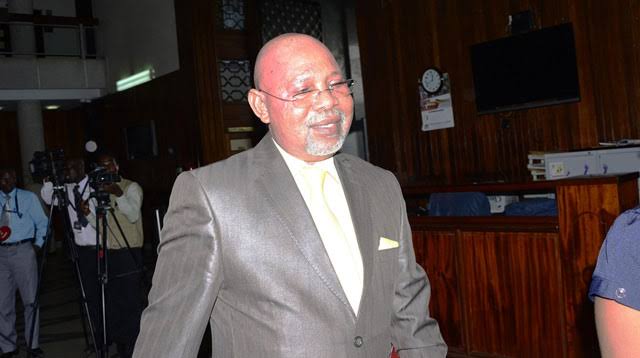 The Minister of Internal Affairs Gen Abubaker Jeje Odongo has told off Ugandans that government is not ready to apologize for arrested and detaining opposition criminals.

Gen Odongo revealed this on Tuesday during an interview with  NBS TV. He said that as long as someone was caught committing an offence, the government has no apology for arresting him/her.

When the minister was asked about the intention of arresting NUP supporters , he said that they were going to destabilize the country.

“There is no secret in the intentions of NUP. They are still bent on trying to destabilize the country with an intention that President Museveni, who won the election, doesn’t swear in. There are plans. They are masterminded by internal groups here assisted by external groups. We are aware of these plans but we have no reason to be unduly worried. This is a matter we can control. Indeed the country will continue on the trajectory of a peaceful, growing country,” Gen Odongo said.

“No one is being held in a safe house or CMI dungeon. I wish I could meet and talk to those people saying they had been tortured in safe houses. I don’t have that experience or knowledge.”

Stories of people especially those on the opposition side being abducted have become a serious national issue where hundreds of people who are believed to be supporters of the national Unity Platform (NUP) have been arrested and some tortured since last year in November.

Some of the few people who have been released have narrated their ordeal while in security agencies’ custody.

Bony Obicho, 25, a mechanic who was working on Kyagulanyi’s damaged campaign cars was among the more than 100 campaigners who were arrested on 30th December last year at Kalangala island.

He narrates that soldiers used to beat him and on asking why he was being beaten, soldiers reportedly responded, “Kyagulanyi cannot take overpower, you are going to die.”

Obicho was among the 13 NUP supporters granted bail on February 8th, 2021. After release, he was taken to Mulago and later transferred to Lubaga Hospital.