NRM money heist: Minister Kiwanda clashes with police in the arrest of corrupt party boss as another State House aide languishes in Nalufenya

Kintu has since been released on police bond while Bamutaze, who was arrested along with her daughter and driver remains incarcerated at Nalufenya police station in Jinja. 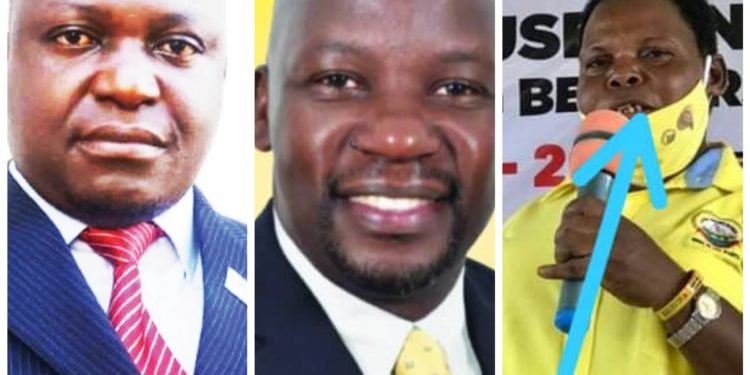 The net cast by officials of the ruling National Resistance Movement [NRM] to fish out swindlers of party funds seems far from getting done.

For the last week, news of officials at Yoweri Museveni’s Kyambogo office have been dominating the media space. About seven party mobilisers and vote protectors in Busoga sub region under the Milly Babalanda- led NRM National Chairman office were briefly detained at Nalufenya in connection to over Shs200m misappropriated funds.

The key suspects, George Kintu the regional coordinator and Norah Bamutaze, an official at Museveni’s Kyambogo political office and at State House had remained at large until they were netted one after the other just last week.

Kintu has since been released on police bond while Bamutaze, who was arrested along with her daughter and driver remains incarcerated at Nalufenya police station in Jinja.

According to Faruk Kirunda, the office Administrator at Kyambogo, the two will have to vomit the money they are accused of misappropriating so it’s given back to their earlier intended recipients.

In Luwero, the situation was indeed a tense one as police nearly got into a fist exchange with Minister Godfrey Kiwanda’s security detail while attempting to arrest a party official who is accused of swindling millions of party cash.

Led by the Luwero Police Station’s Officer in Charge of Criminal Investigations Issa Balikitenda, the officers stormed Luwero Diocese guest house in Luwero town on Thursday and besieged a meeting called by State Minister Kiwanda to evaluate the party performance in the recently concluded general elections
and ordered the party District Vice Chairperson Zenar Nasur to follow him to the station for questioning on allegations of embezzling party funds.

The officers who had looked for Nasur alongside party publicist Wasswa Tamale are said to have been tipped off by councillors who accuse the duo of embezzling Shs29 million meant for facilitate district council candidates in the just concluded polls.

Kiwanda ordered the policemen to vacate the hotel premises and instead call their District Police Commander to reach him. But the police officers refused to heed to his demand leading to a verbal exchange between the policemen and Kiwanda’s aide identified only as Captain Kirumira.
Later, the police officers retreated to a location a stone-throw away from the meeting hall but maintained close watch at entrances to ensure that Nasur doesn’t escape.

At around 5:30 pm after the meeting, Kiwanda pleaded with policemen to allow him to drive Nasur to Luwero Central Police with the police convoy. Kiwanda met the area District Police Commander Abraham Tukundane briefly before surrendering Nasur to the CID detectives for a statement.

As Kiwanda was meeting the DPC, the councillor and youth leaders besieged the police station demanding that Kiwanda leaves the detectives to investigate the accused official.

Katikamu North MP Ibrahim Byandaala last week pinned Nasur in a statement at police that he had signed a cheque for her to withdraw the money and give it to the councillors which he later learned with shock that she had not delivered it.

in an interview with the press, Nasur denied any wrong doing as she said the said money had been used to mobilise for the party in the local council elections as the circular for it had been received later after she had already disbursed the money. She however shared the accountabilities with the party secretariat.