They should tell us if they fear Museveni! Besigye’s People’s government angry at ICC for ignoring their petition against the President

by Stephen Kalema
in News, Politics
28 2 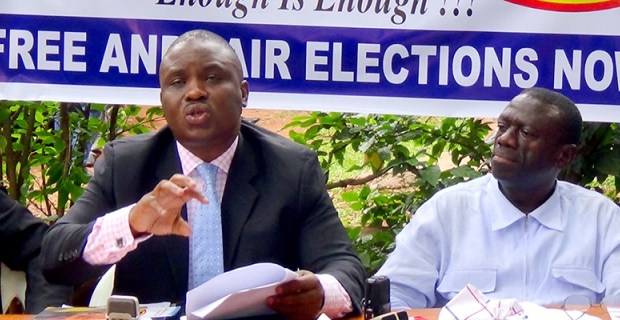 People’s Government leaders are not happy with the International Criminal Court (ICC) for neglecting the petition they filed against President Yoweri Museveni.

In November 2019, the political group under the leadership of four-time presidential candidate Dr. Kizza Besigye embarked on collecting signatures and evidence to back their petition against Museveni and other government officers to the ICC.

Some of the incidents they cited in their petition are; brutality against opposition members during public gatherings and protests, attack on the Rwenzururu Kingdom palace in Kasese town, which led to the death of more than 100 people, the raid on Parliament by the army during the age limit debate, cases of kidnaps and murders in the country

In their petition, they want president Museveni and others to answer for their alleged crimes against humanity.

As per the Rome Statute on which ICC was established, crimes against humanity include murder, extermination, enslavement, torture, enforced disappearance of persons and imprisonment among others.

Last year, the group managed to collect 2 million signatures and they handed over the petition to ICC however, up now Court has never reacted towards the petition, a matter that has made some of the leaders in the People’s Government to express their dissatisfaction towards ICC.

While speaking to journalists on Tuesday, the vice-President of the People’s Government Erias Lukwago said that since the court is not reacting to their petition, they are going to re-write another letter to them.

“In this letter, we shall be asking them to tell us why they are not reacting to our petition. They need to tell us whether they also feared President Museveni or the task is too heavy for them. Another worrying beat is that Uganda is front lining a certain judge to become an ICC prosecutor and they try, by all means, to see that judge Okolanyi gets that position purposely to sabotage our case,” Lukwago said.

The Lord Mayor of Kampala added that in case ICC gets a prosecutor from Uganda it may be hard for their case to be heard since she will be influenced by the government which endorsed her for that job.

“If the prosecutor is not from Uganda, it will be okay but if she is from Uganda, the state will threaten her family, relatives since all of them are here so she will fear for them hence sabotaging our case. We perfectly know that the government is fighting hard to see that this case dies but even us we are not seated we shall whatever it takes” he noted.

The People’s Government’s petition is the second one to be initiated by the opposition against the government officials. The first one was in 2017, where a group of Members of Parliament sent a petition to ICC to ask for investigations into possible atrocities that were done by security forces during the raid on Rwenzururu Kingdom palace.

Rema Namakula will be busy with her husband! Comedian Alex Muhangi reveals why he removed singer from list of artistes to perform on his Valentine’s show

SAM EVIDENCE ORIKUNDA: DGF is not bigger than Uganda’s sovereignty

SAM EVIDENCE ORIKUNDA: DGF is not bigger than Uganda's sovereignty