My dad will pull out his hammer and acid on me but I don’t care! Tamale Mirundi’s son speaks out on kissing Don Zella, a woman old enough to be his mother 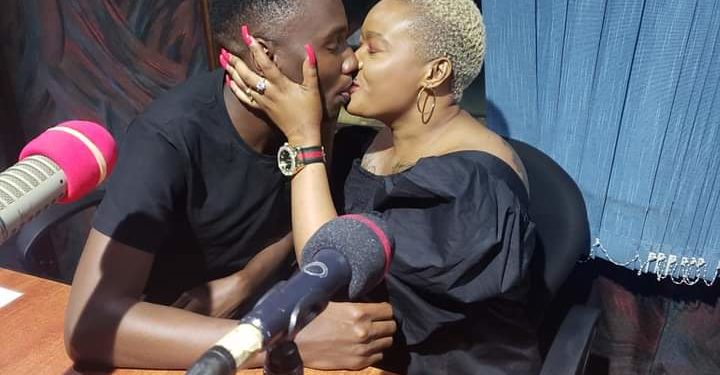 Tamale Mirundi Junior, a son to controversial political analyst Joseph Tamale Mirundi has said that he does not care what people think about him following his Saturday act of publicly kissing socialite Don Zella, a woman old enough to be his mother.

“If kuwoma was a person       ,” the socialite captioned the intimate photos.

However, the duo’s behaviour did not go well with some social media users who expressed disappointment especially in the young man whom they said, given his father’s status in the country, shouldn’t associate himself with such behavior.

They also told off the aging socialite to respect her age by not going around to involve herself in romantic relationships with young boys. They also warned her that she was to feel it rough when the father of Mirundi Junior gets to know about the erroneous act.

But commenting about the incident, Mirundi Junior said it was not a crime to let a woman like Don Zella to have a taste of his nice lips.

“I am overwhelmed by the reaction on social media – where people are saying that I have disappointed them. I am asking myself whom have I disappointed? It is my life.We were singing a song and I was the most suitable character. You know, I am that one guy with nice lips and so, when any woman tells me that ‘Junior you have nice lips, I want to kiss them’, why should I refuse?” Junior wondered on Sunday.

He further revealed that his father may not feel cool about the incident but he (Junior) does not care.

“Leave us alone. Who says the photos didn’t portray a good image?” he asked. “I don’t mind what people are saying, whether they regard me as a wasted person, I don’t mind,” he noted.

“He will pull out his hammer and acid, gun, etc but I don’t care. He has not reached out to me yet but I will now spend about 4 days without going home.”