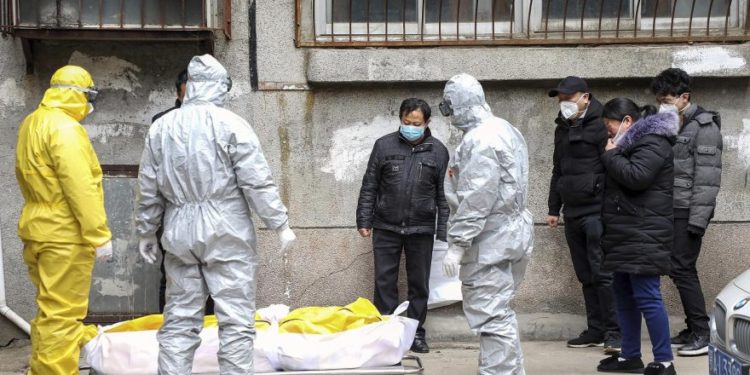 Funeral home workers remove the body of a person suspected to have died from the coronavirus outbreak from a residential building in Wuhan, Hubei Province, on February 1, 2020.   –   Copyright  Chinatopix via AP, File

An unprecedented leak of Chinese documents to CNN revealed for the first-time what China knew about the first weeks of the COVID-19 outbreak, but didn’t tell the world about it.

CNN analyzed the document with the support of half a dozen experts, including a European security official, using complex digital forensic analysis by looking at their source code.

Nick Paton, CNN, International Security Editor said, “The documents provide a number of key revelations about the province of Hubei home to epicenter city of Wuhan, Firstly some of the death tolls were off the worst day in these reports is February 17th, where these [leaked documents] say 196 people who were confirmed cases died but that day, they [China] only announced 93”.

A Switzerland-based Independent Panel for the Pandemic Preparedness and Response determined that “Beijing could have been more vigorous in applying public health measures when cases were first detected in the city of Wuhan, in Hubei province.”

The independent review panel reported that “China and World Health Organization (WHO) could have acted quicker and more forcefully to contain the start of the COVID-19 outbreak.”

The report revealed to the investigation panel that public health measures in China could have applied more strictly in the country by the Chinese local and national authorities in January 2020.

The Chinese officials did not report the case to WHO until December, 31.

Wuhan announced the city’s lockdown on Jan. 23, 2020, when the virus already started to spread to South Korea, Thailand, Japan, and the United States.

“The report also highlighted that WHO did not declare the outbreak a pandemic until March 11, 2020, after some health experts and media outlets had already begun adopting the term. By that time, there were already 118,000 cases and more than 4,000 deaths worldwide,” CNN indicated.

“The independent panel, co-chaired by former New Zealand Prime Minister Helen Clark and former Liberian President Ellen Johnson Sirleaf, criticized WHO for its delays in sounding the alarm, and called for reforms to the UN agency,” CNN reported.

Previously, several countries such as the U.S and Australia accused Beijing of preventing the outbreak’s severity in its early stages.

Government to reopen schools for all learners next month

Government to reopen schools for all learners next month