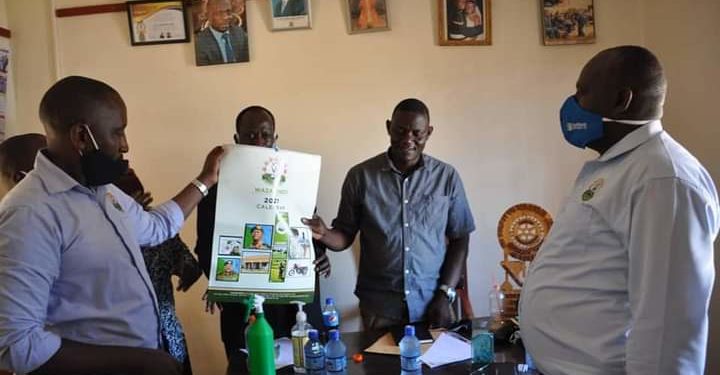 Uganda Peoples’ Defence Forces SACCO( Wazalendo) has offered free financial literacy training and other gifts to the SACCOs in Lukaya, Kalungu and masaka districts and as a gesture of giving back to the civilian fraternity.

According to Col Jack Mugyerwa, the Director Finance and Administration who is heading the team from Wazalendo ,the exercise will cover 18 SACCOs in 6 districts of greater Masaka which include , Masaka, Bukomansimbi, Lyantonde, Kalungu, Lwengo and Sembabule as part of the UPDF’s civil military cooperation activities being carried out in the area to celebrate 40 years of Tarehesita .

Col Mugyerwa, called upon the SACCOs to be United ,seek for knowledge from excellent SACCOs,to be self reliant through encouraging savings and also be trustworthy if they are to excel .

Col Mugyerwa noted that Wazalendo SACCO has not only reached other SACCOs as part of tarehesita activities but also implementing the Cooperative principle No 7 ( Cooperation among Cooperators).

” As WSACCO we believe in working together and developing together, we have always visited fellow SACCOs in the country to share experience ,train them and even give some saccos material support such computers to those that can not afford to enable them operate professionally” said Col Mugyerwa.

The start off of WSACCO exercise was at Lukaya road Toll Market Vendors Association (LUTOMA) SACCO Whose chair man Mr Lwasa Dissan commended the support rendered by WSACCO in sharing it’s successful story and financial literacy to its BOD ,management and SUPCO which he said it made positive impact towards their SACCO.

He called upon other saccos in the area to establish strong relationship with WSACCO ,and embrace such opportunities whenever they are available if they are to excel .Mr Lwasa appreciated the UPDF’s Wazalendo Sacco for the door opened to work together and asked for continued support.

Fr. Waswa John the Chairperson BOD of Blessed Sacrament Bwesa Catholic Parish in lwabenge sub county Kalungu District also applauded the UPDF SACCO upon the efforts it has manifested in transforming other growing SACCOs through financial literacy and other material support.

” I in general appreciate the Ugandan Army for the better civil military relations, if it was those past armies we would not be seated together peacefully, your discipline and commitment has made you strong , successful and unique ” stressed Fr Waswa of Bwesa parish SACCO. Bwesa SACCO is a church founded Sacco with 978 membership composed of ten sub parishes.

The meetings were attended by Senior District leaders,UPDF Officers and the locals.