Bobi Wine: I embarked on a journey to end Museveni’s rule 10 years ago

by watchdog
in News, Politics
13 1 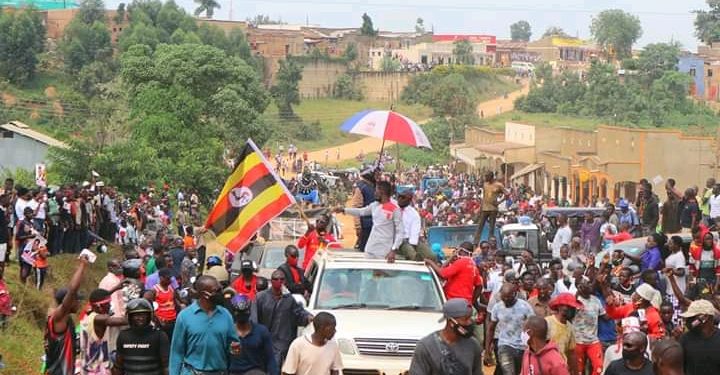 Kyagulanyi with his supporters in Rukungiri

Kyagulanyi commonly known as Bobi wine started his campaign tour to kigezi sub- region on Wednesday in Kisoro district and ended it in Rukungiri district before taking off for Mitooma district in great Ankole with call of togetherness to end Museveni’s regime.

Before entering Kanungu town on Thursday, Kyagulanyi was first blocked by the security agencies at the entrance but was later escorted by the police to the district main stadium where he addressed his supporters.

While addressing his supporters in the district main stadium, Kyagulanyi said that he begun the journey of ending Museveni’s regime 10 years ago that’s why he sung different songs that awakened Ugandans to demand for their rights.

“I started the journey of ending Museveni’s regime 10 years ago before many of you knew it. We have to work together put aside tribal differences and focus on one thing that is president Museveni. I’m from Buganda but all of us have suffered the same so we need to be one hearted and we fight the common enemy,” Kyagulanyi said.

Kyagulanyi added that the only problem of Uganda is Museveni who instructs army and other government security agencies to kill innocent Ugandans and after he sacks them.

“Museveni is the only problem of Uganda, instead of investing money in improving the health, he only buys tear gas and guns to kill our people. Few weeks ago over 100 people were killed by the Museveni and his government thinking that we are going to withdrew from the race forgetting that we have decided to end his regime. Am telling you Museveni will go weather he wants or not but he must go,”Kyagulanyi said.

He also hailed Dr. Kizza Besigye for mentoring him into politics saying that the latter did a great working in awakening many Ugandans including him that’s why FDC and NUP are both aiming at ending Museveni’s rule.

Barbie Kyagulanyi speaking to the people of Rukungiri and Kanungu districts said that as a mother she will do what it takes to see that the two districts are given district referral hospitals saying that Museveni has only concentrated on buying tear gas and forgot people’s problems.

Earlier,Francis Musiimire , the Kanungu and Rukungiri districts NUP coordinator who is also battling for Rukungiri municipality parliamentary seat on NUP ticket had asked the electorate not to fear police but only maintain law and order to have a successful campaign visit.

Kyagulanyi becomes the third president candidate to campaign in Rukungiri district this week after NRM’s party presidential candidate yoweri Museveni and Nancy Linda kalembe who campaigned in Rukungiri on Monday.