by Mubiru Ivan
in News, Politics
21 1 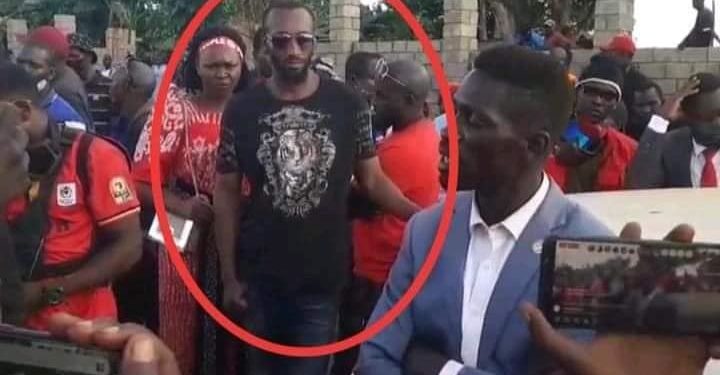 Norbert Elber Ariho has been accused of throwing a ‘hand grenade’ towards Bobi Wine that scared the National Unity Platform (NUP) presidential flag bearer while in a campaign trail in Kayunga on Tuesday.

While in Kayunga, Bobi Wine’s campaign meeting was disrupted by security agents who fired bullets and teargas to disperse his supporters.

During the scuffle, Bobi Wine confronted the officers who were using excessive force to deal with his supporters and as he was exchanging with security operatives, someone threw an explosive that seemed like a ‘hand grenade’ towards the Kyadondo East legislator.

Fortunately, the explosive did not reach Bobi Wine.

On the same event, Bobi Wine’s car was damaged after officers fired it with direct bullets.

Since then, a video has been making rounds on social media with allegations that Ariho, one of Bobi Wine’s private guards was the one who threw the bomb-like explosive towards the presidential candidate.

Bloggers, known to be working for the state are now pushing for an immediate investigation into the matter.

“DEAR UGANDA POLICE Please arrest this man and I will show u evidence that he was involved in a masterplan to hurt Bobi Wine with a hand grenade….  Surprisingly Bobi Wine knew about the plan… Their aim is to tarnish our government.  The assassin calls himself Nob-Art Elb-Art and he works from Mini-Price… his mobile numbers 👇 residing at Salaama Road.  +256703978920 (Sharif Muhatsi) and 0774404606 (Crispas Mugume) WE ARE GOING TO EXPOSE THE CULT.. AND WE SHALL SMASH THEM ALL,” Blogger Arshburg Katto said in a Facebook post on Wednesday.

However, the NUP camp have since defended Ariho describing the current narrative as propaganda aimed at undermining their struggle by the state.

“Whoever plants propaganda in our midst, intended to sow mistrust and confusion amongst us is not a comrade! We know what comrades like Norbert go through every day to keep the Principal and the team safe.
If any comrade is suspected of being a double agent, the best thing to do is not to malign them on social media, but to approach any trusted leader and share that information,” NUP Secretary General David Lewis Rubongoya said.

Eddie Mutwe, one of Bobi Wine’s private guards also said, ” Please Norbert be strong, they want to tear us apart but they will not manage.”

On his part, Bobi Wine said, “If you see them starting their propaganda, just know they are losing it. Don’t lose focus.”