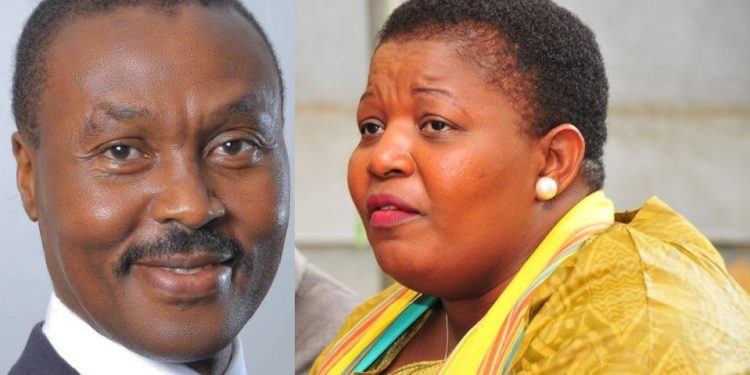 She expressed worry that Gen Muntu being born in Ntungamo District it may deny NRM and President Museveni 100 per cent votes.

Muntu was a member of the constituent assembly (1994–1995) and parliamentarian. After disagreeing with Museveni’s approach to politics and the military, he was removed from the army command and appointed as a minister, a position he politely turned down. In November 2001, he was selected by the members of the Ugandan Parliament to serve as one of the nine Ugandan representatives to the East African Legislative Assembly (EALA).

Lumumba made the plea over the weekend during the inauguration of Ntungamo NRM Action Network Association meant to canvass votes for NRM flag bearers in Ntungamo District held at Ankole Resort and Spa Ntungamo Municipality.

Lumumba donated 2 motorcycles worth Shs8m and Shs2m to the association of 3000 youth to facilitate this mobilization effort.

The association patron Mwesigwa Rukutana who is also the Rushenyi County MP commended the youth for voluntarily coming together to hunt votes for all NRM flag bearers in  Ntungamo district.

The vice chairperson NRM Western Region Dr Chris Baryomunsi asked the youth to use the Kanungu strategy of not voting Robert Kyagulanyi aka Bobi Wine because he marries from Ntungamo and Gen Muntu who is a native. In the ‘Kanungu strategy’, the electorate denied their son of the soil Amama Mbabazi votes in the 2016 presidential elections.

777score is the best place to follow all soccer scores

Losing an eye during bush war doesn’t permit you to disrespect Ugandans, stop being arrogant- Nadduli to Gen Tumwine

Losing an eye during bush war doesn't permit you to disrespect Ugandans, stop being arrogant- Nadduli to Gen Tumwine