Vote basing on manifestos of your candidates- VP Ssekandi to Ugandans 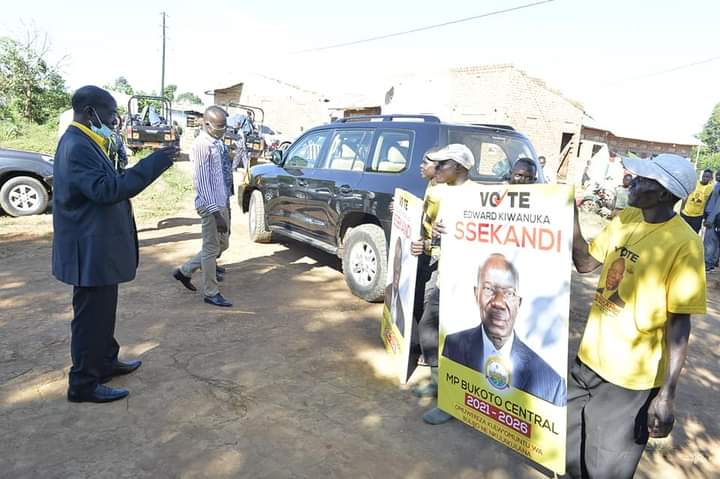 Vice President Edward Kiwanuka Ssekandi has urged Ugandans to base their votes on the manifestos of their candidates since it’s the documented agreement they share with the electorate.

While launching his Member of Parliament campaigns for Bukoto Central under NRM party in Serinya village, Buyaga parish in Kyanamukana sub county, Masaka district, the Vice President said that the people can use manifestos of candidates to judge the performance of any leader rather than rely on sentiments and propaganda which does not develop nations.

The Vice President said that President Yoweri Museveni’s leadership has been pivotal in the development of the country and contributed to the stability of the East African region.

He said that democracies must thrive on elections and the will of the people but warned the youth against complacency and bandwagon adherent support during election time which is not rational and factual.

The Vice President said that political delivery comes piecemeal and urged voters in the country to entrust the country with the NRM and President Yoweri Museveni.

He said Bukoto Central which was considered a highly remote area has gained fame and has amenities like grid power and the few remaining areas are being surveyored for linkage on the national coverage.

Ssekandi urged the electorate against being swayed by lies that many government programmes for the area like tarmac roads and factories are propaganda since they are in the prospective plans of the NRM manifesto for 2021 to 2026.

Uganda will go to the polls on 14th January 2021 to elect their President and Members of Parliament.

Your future is secure with Museveni- Deputy Speaker Oulanyah

Your future is secure with Museveni- Deputy Speaker Oulanyah