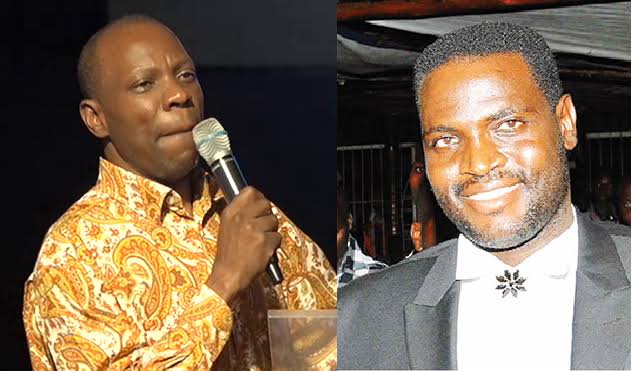 Pastors Ssenyonga and the late Yiga

In a press conference held hours after Yiga was pronounced dead on Tuesday, Ssenyonga stunningly branded him a sinner who had involved himself in numerous abominable acts.

He said while still alive, the Revival Christian Church proprietor sexually assaulted many of his female followers thus infecting them with HIV/AIDS.

Ssenyonga’s offensive attack seems not to have gone well with a section of Ugandans on social media who have gone ahead to roast loosemouthed cleric for having no empathy and respect for the dead.

A one Isabirye Lukalu opined that it’s written in the Bible that only God enjoys the right to cast judgement upon someone and being a pastor, according to him, Ssenyonga should have been in a better position to understand this than anyone else.

” I wonder which Bible this ” Pastor righteous” reads if he cannot know that he lacks the authority to judge who is a sinner and a non sinner, ” he remarked.

Betina Bettie asked the motor mouthed Sheep herder to find better things to do that exposing his uncontrolled hate for Yiga even in death.

” Ssebo nawe tuulako wansi. Get things to do if you are idle so as not to continue exposing your bad hate for a man who is already dead.”

The deceased and Ssenyonga have been at loggerheads for quite some time, with the latter accusing the former of extortion, devil worship and faking miracles to fleece his followers.

Yiga’s candle burned out on Monday at Nsambya Hospital where he had been admitted for about three weeks with liver related complications.