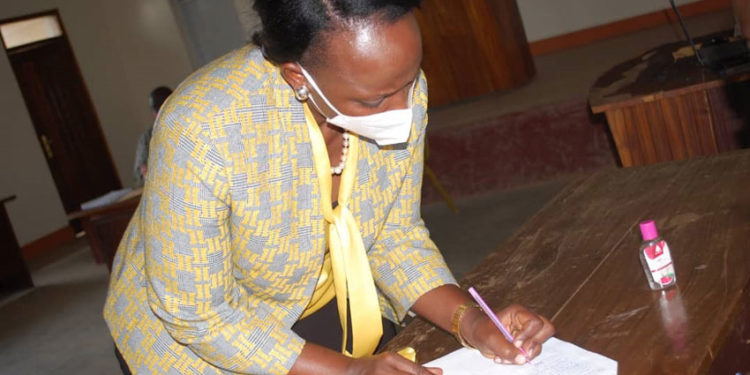 Sembabule: Over the coming months, Shartsi Kutesa Musherure will devote all her time engaging with her constituents on what to expect of their leaders and how to hold them accountable.

This follows her Friday 16th October 2020 nomination for Mawogola North Member of Parliament as an independent candidate.

Ms. Musherure now formally embarks on her campaign that is premised on leadership that is accountable to the people, committed to service above self and unites the people towards development.

The nomination comes on the heels of a September petition lodged with the NRM party tribunal. In her petition Ms. Musherure outlined numerous and shocking acts of violence, voter intimidation and massive importation of non-Sembabule residents for the purpose of voting. The petition also highlighted the unilateral decision taken by some members of the NRM electoral commission contrary to the established and agreed upon voting guidelines.
According to Ms. Musherure, the environment created in the party primaries could not be classified as either free or fair; as such the results as declared on the 30th of September 2020 lacked legitimacy and were not representative of the will of the people of Mawogola North.

“I am pleased that following a thorough review of the evidence presented the tribunal found that my petition was “persuasive” and “successful”. That the Central Executive Committee (CEC), chaired by President Yoweri Kaguta Museveni, subsequently decided to withdraw a declaration of Mr. Godfrey Aine as NRM flagbearer for the MP seat of Mawogola North is proof that the NRM party holds true to its ideals of democracy and patriotism and chooses the principles of fairness over political expediency,” Ms. Musherure said.

“As I formally start my campaigns on individual merit, I would like to emphasise that I remain a member of the NRM party, devoted to its principles of patriotism, democracy, social economic transformation, Pan-Africanism and national unity,” she added.

Ms. Musherure reiterates her unwavering support for the NRM party chairman President Yoweri Kaguta Museveni and commits to actively campaigning for his re-election and all other NRM flag bearers in the upcoming 2021-2026 National Elections.

Businessman David Katumwa accused of sleeping with his neighbour's S.3 daughter, takes her away from parents home