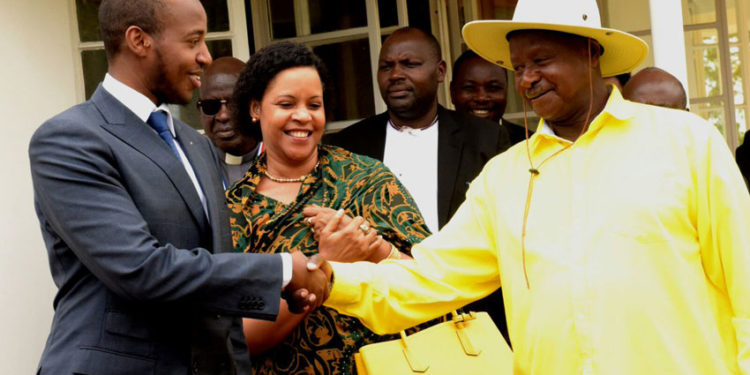 It is recalled that His Highness The King and President Museveni were organizing a World Monarchs Summit which was to take place between 7th to 11th September 2020.  The President and King of Tooro went ahead to issue a joint communiqué confirming the summit.

Meanwhile, before he left for Middle Middle East, the King had approached money lenders who would lend him money to facilitate his travels.

The King returned mid January after accomplishing his delivery job.

According to a highly placed source in the Kingdom, upon arrival, King Oyo reached out to the President who promised he would pay the money lenders the following day.

“Unfortunately the President has never fulfilled his pledge up to date. The King thought that the President had forgotten and he sent his Principal Private Secretary Mr Jonathan Baguma to meet Dr Kenneth Omona, the PPS to the President to remind his boss,” the source told this website.

After a month and pressure mounting from money lenders, the King directed his PPS to officially write to President Museveni which copy, this website has seen reminding the him to fulfill his promise so that he can pay off the lenders.

“This has made the King to believe that the President himself is taking him for granted and not thankful to the batooro who have always showered him with votes whenever it is time for voting. The President meets people like Catherine Kusasira, Bebe Cool, Balaam Barugahara, Full Figure and others of that group more than the King. President also gives his pledges immediately on the above group and may spend even years without fulfilling the Kingdoms pledges some which are even minor,” a Kingdom official who preferred anonymity complained.

When this website talked to one of the ministers of Tooro, he said the President had used their King and dumped him and now the King is trying to sell off some of his properties to pay the money lenders yet it was President of Uganda who sent him to deliver his message.

He also said the King had asked for an appointment almost three months back and the President keeps on dodging him but gives audience to people like Full Figure.

“The President can tell a whole King that he is busy and the following day you see in newspapers that he was meeting Sipapa,peng peng, imagine’? As batooro, we will soon sit and collect money to help our King out of this problem that the President put their King into,” the Minister said.

He further said they were also planning a press conference to tell Batooro what was going on between the President and their king and this is to be done next week.

“The King of Tooro cannot come out and expose the anger he has on President Museveni because he is being controlled by the Queen Mother but he is not happy as he has been taken for a ride by President for too long. He is a peaceful King and that is why he never openly complained when his Kingdom was under attack and being divided by President Museveni by taking away Bundibugyo and Kasese districts. We see these things and when we uprise as Batooro, it will be very hard for us to ever support the NRM government again, he said.

By press time we were trying to reach out to Dr Omona, the PPS to HE President but our calls went unanswered.