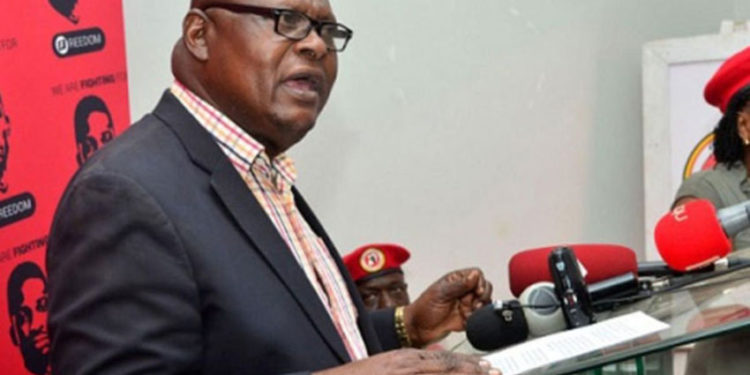 Under fire Moses Nkonge Kibalama, a founder of Robert Kyagulanyi’s party has described Uganda’s president as a “genius’.

“He is a genius,” he said, adding that Museveni was also “a blessing to Uganda”.

The praise statement came as a surprise to a man who teamed up with the youthful Kyadondo East legislator Robert Kyagulanyi to oust the Ugandan leader of 35 years.

However Kibalame says for Museveni to have ruled Uganda for more than 30 years, he must be a special kind.

He recounted past presidents who could not hold power for a year including Yusuf Lule, Godfrey Banaisa, the military commission of Edward Rugumayo and Paulo Muwanga etc.

The interview titled “Kibalama: the man and his politics”, the man who handed over a party to Mr Kyagulanyi, said, he has been working with security before.

He also explained circumstances he interfaced with chief of defence forces (CDF) Gen David Muhoozi who he mentioned in court last week.

Kibalama said he called Muhoozi to report suspicious men who were turning up and his home uninvited. He said UPDF deployed at his home to render him protection.

However, Njala kept probing the man who had incoherent answers. The host would eventually ask, “Are you free?”

Kabalama answered, “I am free,” to which Njala quipped, “You are not”.

Njala went ahead to say Kibalama had extra security. That he has people he moves with who are not part of his usual detail.  Kibalama denied the assertion.

However, Kibalama said he was ready to campaign for President Museveni if “invited”. He also decried being sidelined in NUP.

The comments Mr Kibalama made on television have further led to more questions whether Bobi Wine did due diligence to deal with the man of his profile and character.

Kibalama has been under state protection for the past weeks. He said in court that he has been kept in Mbale and denied a video that circulated last week in which he said he demanded five million dollars from Bobi Wine whom he sold his briefcase political party NURDP.