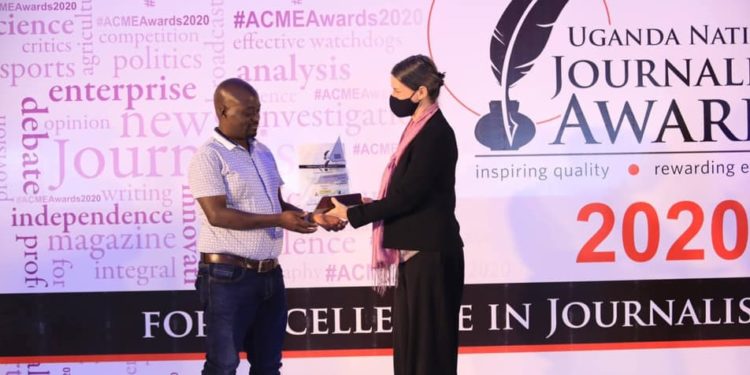 Covid-19 containment restrictions and government-issued standard operating procedures could not dampen the mood of the 40 people gathered at Mestil Hotel in Kampala on Friday 11 September to celebrate exceptional reporting at the Uganda National Journalism Awards 2020.

Journalists in Uganda, like their counterparts around the world, have had a tough couple of months characterised by closures, furloughs, declining revenues and increased restrictions on their operations. These challenges were either prompted or exacerbated by the ongoing pandemic. While the pressures have yet to abate, for those gathered to witness the announcement of winners of the Uganda National Journalism Awards 2020, the event provided much-needed assurance that their work is valued and that striving for excellence, even in the midst of hardship, is not in vain.

A programme of African Centre for Media Excellence (ACME), the Uganda National Journalism Awards represent a pinnacle of achievement for Ugandan journalists. The awards, supported by the Democratic Governance Facility, are a platform on which first-rate, agenda-setting journalism in Uganda is heralded and publicised.

A total of 241 entries from 123 journalists were entered for competition.

This number is consistent with participation levels in previous iterations of the Uganda National Journalism Awards. However ACME’s board chair, Dr Monica Chibita pointed out that women constituted only 16% of participating journalists.

“We would like to encourage women journalists to participate more not only in the awards, but also in other ACME-run activities and programmes,” she said.

Bjerler called on newsrooms across the country to afford more opportunities to women journalists to expand their reporting portfolios and to participate in covering male-dominated beats.

“At times they are relegated to ‘women’s issues affairs’, when they can do an equally good job on more mainstream issues,” she observed.

Adding, “We applaud your efforts, and look forward to even more inclusion and participation of women in next year’s event.”

A panel of 16 expert judges from the academia, public communications and the media assessed each story on the basis of reporting accuracy, writing, reporting rigour, analysis, relevance and enterprise.

Dr Charlotte Ntulume, a lecturer at Makerere University Department of Journalism and Mass Communication who chaired the panel of judges, noted that there has been a general improvement in the quality of work that journalists have submitted for the awards over the years.

In a speech delivered on her behalf by fellow judge, Dr Emily Maractho, Ntulume singled out investigate reporting and radio news as area in which “journalists’ aptitude has improved”.

She added: “The vibrancy of man of the (radio) reports shows a breath of fresh air in this important medium … It is heartwarming to see that radio journalists are doing their best to give the audience a good show.”

Ntulume said that despite the improvements, the judges agreed that there were several shortcomings in a number of the entries submitted for competition. Among them are a lack of reporting depth and enterprise, poor sourcing, inadequate editing and the limited use of the broad range of storytelling tools now available to journalists.

The winners, listed by category, are:

ANDREW MWENDA: Who votes for who? Are Uganda’s elites useless?