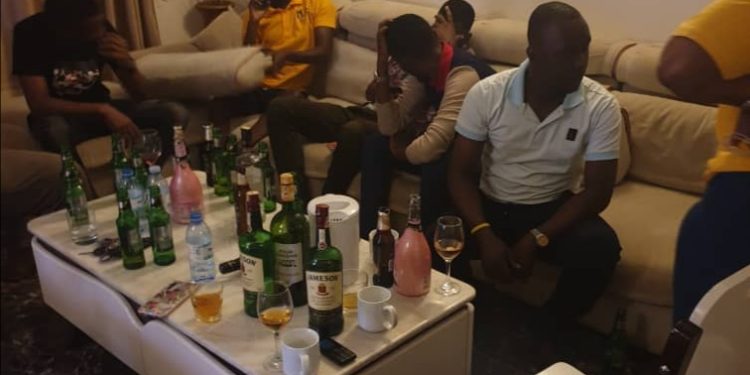 The territorial Police of Kira road Police carried out a joint operation on enforcing the ministry of health guidlines on Sunday night.

A resident had complained in a newspaper letter that some residents had turned their home into a bar of sorts, making loud noise in a residential area.

At around 9pm in Ntinda and Kiwatule, police moved into action.

They zeroed down to an apartment located in Balintuma village near Firidina Road, drinking alcohol with loud music disrupting the peace of other residents.

The drunkards were also defying the Presidential directives and there was fear that their inconsiderate behavior could spread Covid-19 within their village.

When police accessed the apartment, seven suspects were arrested and are all currently detained at Kira Road Police on allegations of disobedience Lawful orders and also doing a negligent act likely to spread and infection of a disease.

In a related operation , Kabalagala Police also carried out an operation in Bunga at Nomads Bar where 49 people including the owner of the bar Fred Kamau and his 8 managers were arrested . All are currently detained at Kabalagala police station.

PATRICK SSEKATAWA: Dear Mr Museveni, here are the 4 things that are ruining your good work in fighting covid-19