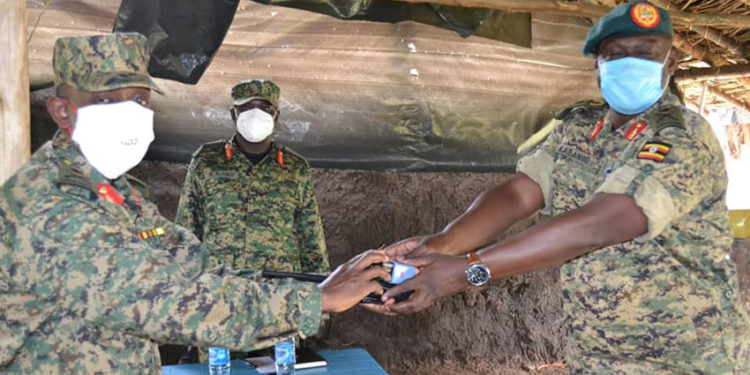 Brig Michael Kabango has handed over the UPDF’s 5th Division Command and Control to Brigadier Gen William Bainomugisha in a ceremony presided over by the Commander Land Forces (CLF), Lt Gen Peter Elwelu, at the Division Tactical Headquarters.

The CLF said Brig Gen Kabango had done a commendable job during his tour of duty in 5th Division by ensuring that East Acholi and Lango Sub-regions remained relatively peaceful.

“Despite many challenges especially that of cattle thieves from the Karamoja axis and the current COVID-19 enforcement challenges, porous borders vis-à-vis COVID-19 threats, the situation at hand in the Division is a clear testimony that the commander has selflessly served and done his best,” said the CLF. He recognized the efforts of the incoming General Officer, Brig Gen Bainomugisha, in the continuous building of Military Police where he has been the Commandant.

“Both Officers have mastered what the Military is. Military service is a calling, a job which takes a lot of sacrifice, courage and dedication; attributes that are appropriately exercised by these two Commanders. If you don’t possess any of the above qualities, you lose out in the military,” said Lt Gen Elwelu.

The CLF told the incoming Commander, Brig Gen William Bainomugisha, to use his wide range of experience to maintain the prevailing situation in the Division. He called on commanders to uphold the UPDF’s spirit of comradeship, teamwork and cooperation at all levels of command.

He wished Brig Gen Kabango the best of success in his new assignment at the African Union (AU) Peace Support Operations Department. The CLF said Brig Gen Kabango has good experience in African Union Peace Support Operations having served as Contingent Commander for Uganda’s AU Forces in the Central African Republic of Republic and Somalia among other related deployments.

The incoming and outgoing General Officers pledged to give in their best to their new assignments and thanked the UPDF leadership for entrusting them with the new responsibilities.

We shall deal with you! Museveni warns people pronouncing Kabaka Mutebi dead