by Lawrence Kazooba
in News, Politics
8 0 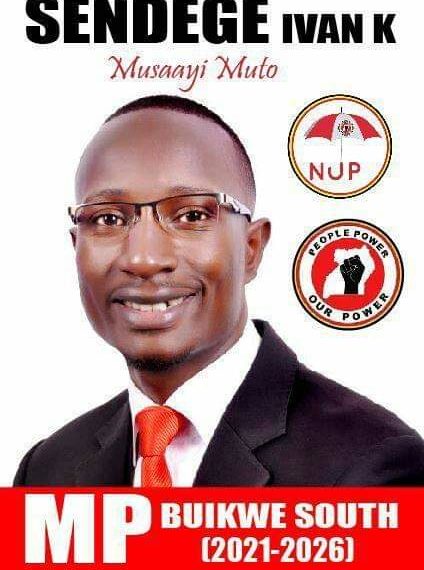 It was very evident from his dress code that Ivan Sendege, is a People Power member. His spotless suit, with a red tie, is a signature dressing for members of the National Unity Platform led by Robert Kyagulanyi aka Bobi Wine.

Sendege speaks about his aspirations to represent the people of Buikwe South in the Ugandan parliament with a passion of a woman in labour. He wants to see many things change in a place of his birth. He also takes pride in attending schools and starting his work life in Buikwe.

His sharp brain is evident, given his quick grasp of the political developments in the country. The Democratic Party diehard started explaining why he was opting for the National Unity Platform ticket this round.

In his constituency, the youthful leader said, the young people he speaks to have already made their choice. They are moving with Robert Kyagulanyi, NUP flag bearer.

Sendege intends to oust incumbent David Mutebi (NRM) who he accuses of failing to represent the area effectively in Parliament.

The accountant with experience in advocacy for children rights and education, was born in Buikwe town.

“I was born, educated and worked in Buikwe,” he says, defending his understanding of issues affecting the people in this area.

He first worked with International Needs Network of Uganda, a not for profit organization educating children who cannot access education due to poverty or broken homes.

Sendege is the first born to Benedict Kugobera and Maama Mary Nagita, residents of Buikwe Ward A.

“I learnt to be responsible right from here. I was raised a leader in my family,” Sendege says.

Not every child or youth in Buikwe has got an opportunity to rise to where Sendege has reached, and this has driven him to seek ways to fish out promising young people to attain an education. He has used sports tournaments to reach out to youth and inspired them to attend school and work hard to overcome poverty.

In 2011, Sendege married his beautiful wife, Rachael and currently have two children.

He dreamt of being a lawyer when he was young. However, he did not manage to achieve that. But the work he does in human rights especially for children, made him meet his earlier mission.

“Even if I am an expert in finance, when I got a job in Uganda Child Rights NGO Network, I still opted for advocacy.”

This has helped him become instrumental in shaping a number of things surrounding children rights, including an Act in Parliament on child rights as well as the children sacrifice bill.

Sendege says many people have benefitted from his advocacy and he needs a platform to impact directly the people in his home area.

“We have got many representatives in the past, but have all proved to be talkers, and less doers. There is little work done when it comes to the grassroots. Young people are unemployed and embracing criminality under their watch,” Sendega argues. He is disappointed that these leaders cannot use their platforms to teach their constituents on how to use their land for development and prosperity.

“With a little push, our people can go far in uplifting themselves from poverty.”

Sendege says he will work to ensure his constituents gets markets for their produce.

“I will find markets for maize, groundnuts, coffee especially out of the country,” he said.

“Our people especially farmers and fishermen, are cheated and end up working for middle men.”

He said he will extend electricity services deep into the area. “Without power, people cannot participate in production.”

Sendege decries the state of health care services in Buikwe South which he says, are in bad shape. “However, politicians speak about healthcare during campaigns.”

He said he is going to keep women close to his agenda, by working in groups to participate in income generating projects.

“It is women taking care of households these days,” he said, “We should support our women.”